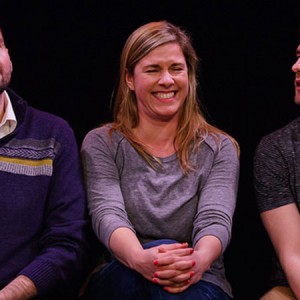 Q&A with Kate Symes: On improv and yoga, finding truth in comedy, and tequila

Get your business in front of FIST's 3,500 audience members WIT announces 16 players to join Harold teams

Kate Symes is an improviser, yoga instructor, and vampire slayer (two of those three things are true — you decide). A member of the WIT ensemble Commonwealth and reigning FIST champion with Going to the Movies Alone, Kate recently took the time to share her very insightful thoughts on improv and yoga, finding truth in comedy, and tequila.

In addition to performing and teaching improv, you teach yoga. Do you see a relationship between the two?

I definitely see a relationship between improv and yoga. Oh God, I could talk about this for 12,000 hours, so let me see if I can be concise-ish.

Both improv and yoga, when practiced well, require you to be fully present in the moment. That sounds like such a cliche phrase these days, because everyone’s talking about mindfulness and being in the moment and barf. But it’s not touchy-feely or other-worldly — it’s life. We think we can think our way into a better scene or a better quality of life, but all we have at our disposal is the present moment and the way we react to it. If we’re preoccupied or not listening to our own gut and what’s happening around us, we’re missing out on EVERYthing.

There are a couple yogic practices I think are really valuable for an improviser: non-judgment or non-violence (ahimsa), and non-attachment (aparigraha). Non-judgment is a huge one — I find so many improvisers judge themselves and the moves they make or think about making in scenes, and then they’re stuck on stage not wanting to make any move. If you cultivate a non-judgmental beginner’s mind, where no move is good or bad, it just IS, then suddenly, all possibilities are open to you.

Of course, improv and yoga are not identical and it would be an oversimplification to map everything about improv onto yoga and vice versa. In practicing yoga, you’re really delving into yourself and figuring out how you operate and finding peace with that. In improv, you’re trying to commune with others and ultimately create a piece of comedic performance art together. Some parts of yoga help you do the improv stuff, and some parts of improv help you do the yoga stuff. I think if you’re really good at either thing, you’re using bits of both all through your day and life.

Tell us about your first show improv show ever. What was it like?

I remember being sick to my stomach before, but the stomachache turned into sort of lovely butterflies right beforehand, and by the time I left the stage I was high as a kite. I loved it. I also did a show with Press Play very early on at the Comedy Spot in the Ballston mall. It was in the back room and it was a million degrees, and no AC. There were a couple people in the audience, and my then boyfriend/now husband was among them. I remember thinking, “This is not a good show. But for some reason I’m still loving it.”

How did you first get involved with WIT? What stands out for you about the WIT community?

A few friends were starting to take classes at WIT so I followed them. My first class was with Tara Maher and I was instantly like, “Who is this comedic genius?” Everything she said was so funny and I was so intimidated. Our class was pretty terrible at improv — as you generally are at that stage. But I think we had a unique self-awareness of how terrible we were.

What stands out to me about the WIT community is it’s full of these super passionate, intelligent people who are also really caring and supportive of each other…I’ve never been a joiner, and I “joined” WIT. Willingly and happily. The best feeling is heading upstairs at Source before or after a show and knowing no matter who’s there, you’re gonna shoot the shit with them and laugh and make a new bond. I’ve made some of my best friends as an adult at WIT. If it weren’t for you guys, I’d be drinking pinot grigio and doing hilarious scenes by myself, or eventually with a cat.

I think newer improvisers might be surprised by just how much a person continues to learn from this art form, no matter how long you’ve been doing it. What’s something you recently learned, or that you’re working on in your own performances?

I’ve recently learned just how little I’ve been listening in my scenes all these years. I always considered myself a good listener; I used to be a newspaper reporter, and I was like, “I interviewed people for a living – of course I can listen and assimilate information.” But the more I learn about doing improv, the more I realize, “Holy shit, I haven’t been listening to understand. I’ve been listening to wait my turn to talk.” I try not to do that anymore, as much as possible. But I still have trouble with it in a work setting. I still don’t listen as well as I could when I’m in meetings.

The main thing I’m working on in my own performances is to find truth in comedy — or rather, comedy in truth. Truth in Comedy is the first book I read when I started doing improv. Even though that’s all they talked about in it, it’s taken me almost six years to figure out that improv really is better, and funnier, when it rings true.

In conclusion, if you were going to lead a yoga-and-improv retreat, where would you hold it, who would be your celebrity guest, and what would you serve for dessert? Any other details you care to share?

It would be in Tulum, Mexico (where I got married and had the literal best food of my entire life). Can I have seven celebrity guests? Okay fine. Two. I would have TJ & Dave for improv (okay that’s two but they’re like a package). And I’d have Kathryn Budig for yoga. She’s a teacher I’ve studied with several times and she has a great sense of humor and doesn’t take herself too seriously. She’s a badass. She’d fit right in with the improv scene. For dessert I’d serve tequila. Ooh I am LOVING this retreat so far. Can we plan it?

If you want to get tickled to high heaven seeing hilarious performers like Kate, come see a show! Check our calendar for the latest listings.