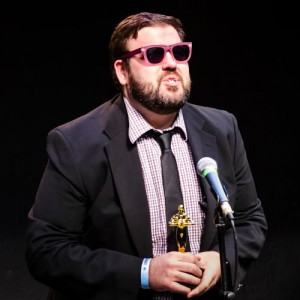 WIT grad and filmmaker Tony Lazzeroni: “I’m far more likely to cast an improviser in a project than your typical actor”

Tony Lazzeroni is a filmmaker who’s been working in DC for eight years. In this interview, he talks about why he prefers directing improvisers over other actors, and what drew him to finally trying improv for himself. Tony also shares some words of encouragement with members of the local creative community who are curious about improv but scared to take the plunge.

You’re a filmmaker, and you did video production work for WIT and collaborated with a number of WIT community members on creative projects for a while before you decided to take the plunge and sign up for a class yourself. What inspired you to finally do it?

The more I directed improvisers, the more I realized that they think differently than most other actors. They put on characters more quickly, and they fully commit to the characters they create — something that is critical to making any film actually “work.” A couple years back, my production team, Crowded Elevator Pictures, submitted a short film called Parental Advisory for the 72 Film Fest in Frederick, MD. The film starred Brianna Lux from the improv groups Nox! and Aboulia and Scott Holden of Aboulia and told the story of two potential new parents who try to use a video game to determine their parental worthiness. We were nominated for the Best of the Fest award that year, and lost out to another team, but when that team got up onstage to accept the award, the first thing out of their mouths was, “Crowded Elevator, I don’t know how you made your dialogue seem so REAL?!” It was just Brianna’s and Scott’s ability to commit to their characters that really made it work.

In the end, I wanted to understand how my actors were doing what they were doing, both so I could learn to do it myself, and so that I can more effectively direct them. WIT classes have really given me that understanding. I’m a better filmmaker for it.

Tell us about your first improv class. What surprised you? What was the most fun? What was hard?

My first class was with Dan Brown and Ceci De Robertis, and it was a blast. The mantra I took away from Level 1 was, “Get out there!” We were constantly encouraged and challenged to get out on stage and do something — it’s improv! The only wrong move is no move. It’s tough when you’re in a room full of people you don’t know to get out in front of them and do and say silly things, but it is such an adrenaline rush! I would leave class every day grinning ear to ear. I’ve never been so tired and energized at the same time!

How has studying improv influenced you as a director? How about as a producer?

It’s given me a better understanding of how to quickly develop a character, which makes it easier for me to direct others (especially improvisers) through the process. I also would say that I’m far more likely to cast an improviser in a project than your typical actor because they wind up not just being actors, but writers and contributors, too. For a while, we didn’t even list specific credits on our films because it was so difficult to suss out exactly who wrote what in the final edit.

How long have you lived in DC? What are your impressions of it as a place for making creative work, or finding creative community?

I’ve been in DC for eight years, and I’ve been floored by the growth of the artistic community — seeing new spaces and venues opening up, as well as the sheer number of artists out there. Besides improv and videos, I’m also a musician — I play bass and sing in a few local bands, and jam with other friends on a regular basis (we even built a soundproof practice room in our basement). I have friends who are sculptors and painters, friends who direct and perform in theater, and others who are into dance and performance art. Basically, if you live here and can’t find art to inspire your own creativity, then you clearly haven’t tried at all.

As a creative person who’s new to improv, what would you say to a filmmaker, writer or other artist who’s toying with the idea of taking an improv class, but finds it intimidating, or worries it will be too embarrassing?

You are not alone. You never will be. In your first class, everyone else will have the same concerns and reservations, but when you and your classmates relax and just get out there, you’re going to find out it’s one of the most fun ways to express yourself and create something truly special — literally one-of-a-kind — with each other.

You and some other students recently formed a group, Trustfall. What’s that experience been like?

Trustfall was formed out of my Level 3 class, and it’s a big group — 11 people. Most of us had been in classes together in the past, so we knew a lot of the group really well. At the end of our last class, we all looked around and said, “How do we keep this going?” The simple answer was to put together a group, find a coach, a practice space, and a stage, and just “get out there.” We’ve even taken trips together to Chicago and Shenandoah.

It’s been a wild ride so far. We’ve been floored by the support and encouragement we’ve gotten from other WIT community members. Some want us to be a part of their shows, others want to coach us, and some just want to come see us perform. It’s been really exhilarating. I’m excited to see what we can do next!

What is the last thing that made you laugh out loud?

I was just listening to my favorite podcast, Doug Loves Movies — a game show for movie trivia — and the categories are usually pretty good. The last one I heard (and laughed out loud at) was “Not A Creature Was Stirring: Movies Where Animals Are Cooking.” Puns are so cheap, but so damn funny.