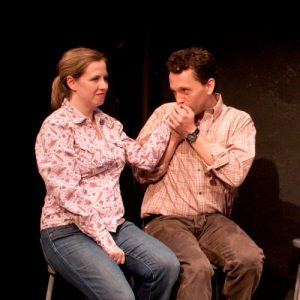 Q&A: Colin and Molly Murchie on their “bit”-filled marriage

John Heiser and Dana Malone: The world is full of 'no' but we choose to say 'yes' The Comeback Bracket adds a twist to FIST XII

Spouses, parents, improvisers—Colin and Molly Murchie met through WIT more than a decade ago (the exact date appears to be a point of contention). Molly is a current member of the WIT team Hellcat and Colin is an alumnus of several WIT projects including the flagship ensemble onesixtyone. They’re also both FIST champions, with Colin winning in 2009 with the team Not Mad, Disappointed and Molly winning the following year with Meanwhile, Back at the Ranch.

In celebration of the run of WIT’s romantic comedy Improv Actually, WIT is interviewing several couples who met through WIT. This is the first.

C: I did short-form in college with Cornell’s Whistling Shrimp. I think Molly and I auditioned together in . . . aught. . . two? Aught four? I had just moved to the District.

M: ‘03. You got every single number and date in this interview wrong. Also, you seem to use two spaces after a period. This hurts me deeply. I have fixed it. You’re welcome.

I started classes with WIT in 2001 and auditioned in 2003 and ended up in the cast of Jackie. WIT was my first improv training. I missed doing theater, but I was in grad school and couldn’t audition for shows, so improv seemed to fit the bill. Et voila. Here we are.

Colin: I think my literal first line may have been “Hello, Molly. It is awkward to be walking 20 feet behind you and the two of us are not acknowledging one another.” Probably not a lot of ladies where that would be a functional first line. Kind of a combo intro + screener there I guess.

We did a show together and then went to Toledo Lounge afterwards, was our first…date-like…event? That’s the first I remember much of interacting with Molly. My impression was that she…brooked no fools.

Molly: My first impression of Colin was actually shortly before the awkward walking incident at a WIT player retreat where he said something so funny, I was moved to write it down. What did he say? I have no idea, but it was written on a piece of yellow legal paper. Then yes, our first show and post-show drinks were the first date-like event. We discussed trepanation. Romantic!

Colin: Molly is a planner in a way I am not and cannot be. It’s an entirely different approach to life, and we need one in the family.

Molly: And Colin is very calm in fraught situations. Sometimes, however, it is a bit too calm. Such as the following scene:

Colin: [Pauses. Remains still, 10 feet away.] I see you have fallen down the stairs.

But that coolness comes in handy when one of the kids gets hurt or the fire alarm goes off just as someone has a pants-related accident. For example.

But I think my favorite thing about Colin, aside from his astounding composure and his world-renowned sensual dance style, is his endless curiosity and knowledge about all kinds of weird stuff. A lot of our conversations start with something like, “I read this article about World War II sock manufacturing in Europe, and…” It’s fun!

Improv has applications in every area of life—from home to work. Has improv helped you in your marriage?

Colin: I don’t know how to describe our interactions otherwise, or how to distinguish improv from our marriage. It’s almost all a “bit,” running 24/7. Even when we have to express something really difficult or serious, that’s the language we use.

Like, we had to admit Miles to the hospital once when he was 2 (*He’s fine.), and it was just the absolute saddest thing to see this little guy hooked up to his IVs and on his little bed which has a cage around it. It’s a little easier when you can talk to your wife about how this is clearly some kind of cuteness-harvesting containment vessel, X-Men style.

We have a lot of shorthand. A lot of characters.

Molly: Miles was admitted to the hospital when he was one, first of all. And yes, our marriage is all improv, all the time. As it was once unkindly noted by a family photographer visiting our home, “You just can’t turn it off, can you?” No, we can’t, because this is how we communicate. Our marriage ceremony was performed by improv superstar Ms. Katie Carson who said in the homily, “Iron sharpens iron,” and it’s absolutely true! It is communication, yes, but it’s also recreation. WE LIKE MAKING JOKES, OKAY?

You’ve got two adorable kids—Miles (6) and Evelyn (3). Has being an improviser influenced your parenting at all?

Molly: Thank you, yes, they are objectively adorable. But to your question, to a degree, yes. As Colin mentioned, I am a planner, and having improv in my life reassures me that everything will generally work out and I can relax a bit. You cannot plan 100 percent with kids. Whether you are trying to get out the door or playing “Restaurant,” things can always take a left turn. And it’s okay. Unless there is bloodshed.

I also am trying very, VERY hard to convince the kids that it’s more fun to agree and cooperate in the spirit of “Yes, and.” I will get back to you on how that works…later.

Do you hope the kids try out improv?

Molly: I asked Miles if he wanted to do improv like Mommy and Daddy, and he said, “I don’t think so…not yet.” But someday, they will either see a real improv show, take an improv class, or something, and all of a sudden, they will realize why Mommy and Daddy are the way they are and why their home life looked like it did.

Colin: My theory has always been that our children will do whatever we are least capable of dealing with; that we’ll somehow end up sincerely but confusedly applauding at their rugby games or similar.

Also, it seems like children almost all do improv, instinctively and at great length, unless you actively discourage it. All this scene and premise creation is how they play 90 percent of the time. Right now Evelyn is “a robot controller” and I am her subordinate robot son, “Sandwich.”  As an adult you just have to unlearn all your inhibitions against creative play in public. I think the kids will grow up with that instinct closer to the surface or more acceptable than in some other families. I know I did.

They do negate though! Evelyn in particular is very defensive of her identity – it’s something she’s just coming up with at all right now – so if she comes up with it it’s cool. “I’m a fairy!” If I come up with it – “Evelyn you’re a good kitty” – I get “NO I’M EVELYN”. Also she’ll sometimes play “a kid” and her concept of what that looks like is frankly unsettling. Very strange and presentational. We’ll work on those; we have time.

Molly: Their spacework is atrocious.