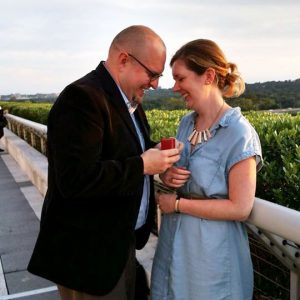 John Heiser and Dana Malone: The world is full of ‘no’ but we choose to say ‘yes’

Sabahat Chaudhary and Marc Reber: From "not talking at an improv festival" to married with a toddler Q&A: Colin and Molly Murchie on their "bit"-filled marriage

From Harold Night fandom to a fateful night at a Medieval Madness birthday party, the romance between John Heiser (Nox!) and Dana Malone (The October Issue) took a while to get started. But now, the two improvisers are engaged and took the time to chat with us about the perks of dating an improviser and their engagement story.

When did you get involved in improv?

Dana: My friend and former WIT player Lizzie Nolan insisted that I check out improv. After seeing a couple of her shows and attending two free Improv for All workshops—which [WIT teacher] Lisa Austin totally called me out on as my instructor for both—I took my first class at WIT back in 2011. Curtis Raye was an incredible teacher and I was immediately hooked.

John: Think it was 2013, my first class at the DC Improv with Shawn Westfall. I had done some stand-up there but realized I needed a more social comedic outlet.

John: I first saw Dana performing with WIT Harold team Breaker Breaker. Two teammates from my indie team, Bryan Jackson and Katie McDermott, were cast on the team as well. I was their #1 fan-guy. We first met after one of their shows, I think. First impressions were that she had great comedic timing and style.

Dana: I can’t remember actually being introduced to John, but we sat across from each other at Bryan’s Medieval Madness birthday party. He was reserved but witty, and he shared his wine with me. I enjoyed his company, but there was a lot going on (for better or for worse, that little dinner theater was flooded with energized improvisers) and we didn’t talk too much that night. I wanted to get to know him better.

John: Yeah ya did. I don’t remember ‘meeting’ Dana either but I do remember stopping her on the street once after we kinda knew each other. It was a moment where I “went for it“ by saying hello and she stopped and said Hi and then we had no idea how to continue so we just smiled and kept going in opposite directions. We were bad at liking each other for A WHILE.

You recently got engaged! How did the big proposal all go down?

John: I wanted to propose on the same spot where I first told her I loved her, the rooftop terrace of the Kennedy Center. Having secured the ring and the blessing of George and Darlene Malone, I enlisted the help of Dana’s friend Dell and her husband Ben to set up a ruse to get Dana there. I miraculously found a small opening in Dana’s calendar and set the date. We sat through a string quartet performance that I don’t remember, other than thinking “wrap it up already!”

Dana: I was producing a show with TBD Immersive that was about to open and my brain was all over the place. My usual sleuthing senses were down, so he definitely picked a great time to surprise me! I didn’t know why everyone cared so much about going to this random free concert, but nonetheless, I was down. Then, after the show ended, everyone was *really* eager to go outside. Only then did it occur to me that maybe something more was going on…

John: Once outside we marveled at the sunset, 7:41 PM as predicted. I gave Dell and Ben the signal that “it” was coming by taking a picture of the sunset with my phone. I took Dana by the hand and tried to remember all the things I wanted to say in that moment. I couldn’t! So I spoke from the heart, managed to fumble the ring out of my jacket pocket and got to the point. Only after calling back to a joke from that first night on the terrace years ago, did she finally say “Yes!”

Dana: Never miss the opportunity for a good call back.

John: But say yes, eventually at least, which she did. Damn good call back though.

What are the perks of being in a relationship with another improviser?

John: Some of my favorite moments from this past year living together are from Saturday morning breakfasts, with a side of improv lesson planning. Whether I was preparing to coach indie squad Please and Thank You or WIT Harold team TableCat, Dana was readying October Issue material, if either of us hit a roadblock the other was there to bounce ideas and concepts off of. We both have performed, coached and taught thru WIT but our background and training are quite different. So there isn’t much overlap in our go-to exercises. And then, debriefing afterward to see how it went, if the players responded. Two improv brains are definitely better than one!

Dana: It’s true. We can troubleshoot any lesson plan.

John: We stop, collaborate and listen.

Also her Bits. I mean the comedy bits! I have to be a stickler about lights out, time to sleep, because we get going on a bit and its nearly a full fledged sketch before we can actually get some sleep. Except no one is writing them down, so they are lost to the sands of time.

Dana: Yes, we often fall into a fit of giggles before bed. We have a lot of recurring characters that like to make an appearance.

John: Game night with the family. It’s so much easier to play Heads Up or Charades-style games with a fellow improviser. But now we’re banned from being on the same team.

Dana: Yeah, from our very first Heads Up game, his aunt commanded, “You’re not allowed to just look at your honey!!”

John: One time they just handed us the cards and had us do the whole game ourselves. Stage time is stage time.

Dana: John finds a way to be calm and collected when my mind is spinning at a million miles a minute. He is patient and will say, “Bring it in, Malone.” He helps keep me grounded. Also, our shared love of Google docs. I’m a big planner, and he will often prep travel docs before me. Yes, we make an itinerary when we go on long trips.

John: Know your audience. I know mine so I don’t go into any big ask (moving in together, getting a dog, etc.) without a Google doc ready… Dana is the most thoughtful person I know. If she knows of a friend’s celebration in a year or so, she probably already has the perfect card for them. Not just picked out either, purchased and ready to go. We live in a very ME world but she is always thinking of other people.

Improv has applications in every area of life—from home to work. Has improv helped you in your relationship?

John: It has helped us see all the “No” in the world around us. In our professions, in our family members, in life the world is full of “no” but we choose to say “yes,” to find agreement. Improv has helped our relationship by helping me before it even started… its a big shift going from flying solo to co-piloting. Improv training helped change the way I discern the important stuff from the small stuff we aren’t supposed to sweat. Being a good partner is a lot like being a good teammate. Knowing your strengths and weaknesses, and those of your partner so you can support where needed and vice versa.

Dana: Absolutely. Sometimes John will get frustrated with me and say, “YES AND ME ON THIS.” Having a shared language certainly helps, and this tendency to want to find agreement serves our relationship. And, day to day, we share laughs together. We have the ability to make light of things when we face challenges. My grandma always used to stress how important it is to be able to laugh at yourself. We do that everyday.