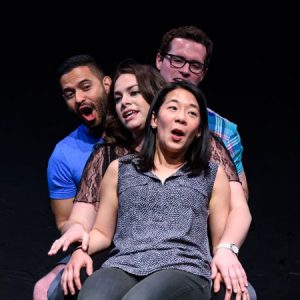 The Comeback Bracket adds a twist to FIST XII

Q&A: Colin and Molly Murchie on their "bit"-filled marriage Cast announced for 2018 edition of Vagina! An Improvised Monologue Show

Last year, WIT rocked the eleventh annual Fighting Improv Smackdown Tournament by increasing the team size limit from three people to four. This year, we’re adding another twist that will make the tournament more exciting and give a second chance to the most worthy eliminated team from the Elite Eight and Semi-finals. For FIST 2018, once teams enter the Elite 8, the tournament switches from single- to double-elimination.

Ladies and gentlemen, we present: The Comeback Bracket.

What is The Comeback Bracket?

The Comeback Bracket allows four losing teams from the Elite Eight and Semi-finals to compete for a spot in the FIST finals.

What is The Comeback Brawl?

Held on Sunday, March 25 at 4 PM, The Comeback Brawl is a four-way match whose winner will advance to a three-way FIST final! This match will take place immediately before the finals at 7 PM.

Who competes in The Comeback Bracket?

Four teams will compete in The Comeback Brawl:

Both semi-final shows will contain two separate matches—the semi-finals themselves and the comeback bracket matches. Voting for The Comeback Brawl will be ranked (or “instant runoff”)—audience members will rank the teams in order of preference and the first team to get to 50 percent of the audience favor will advance.

Check out the bracket design below to get a better idea of how this whole thing will work. Yup, a three way final. And, just like The Comeback Brawl, voting for the finals will be ranked.

Why are you doing this?

To make the tournament more exciting. And to keep a fan-favorite team in the mix til the end.

The deadline to sign up for FIST XII is Jan. 21.