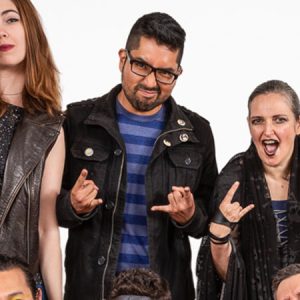 The latest addition to WIT’s series of project shows is the rock-themed Heavy Rotation. The show hits the stage for the first time this July as a featured act in WIT Presents: Summer Escape. Co-creator and Director Erick Acuña gave us a rundown of why you won’t want to miss the fun.

How was Heavy Rotation born?

Back in November of last year, Alan Prunier and I were talking about how much we love music and that we missed playing guitar. We both played in different bands when we were younger, and because of life (and comedy), we kind of stopped playing. We thought that maybe we could come up with a project that combines our love for improv and rock music.

We had a bunch of meetings where we would talk about the format, and we would also grab our guitars and start playing. It was so much fun. We pitched the idea to Mark Chalfant, and after a couple of meetings, we got the green light to put on the show.  Then Mary Ann Badavi joined as the assistant director, and she has been so helpful during this process. We had almost 50 people auditioning, and it was amazing to see so much talent. I cannot be happier with the cast that we have for this run.

Is the show a musical? How will music fit into the show?

Not quite a musical. We call it an improvised rock comedy. Each show will feature different cast members as part of a rock band. There will be a drum set, guitars, bass, and keyboard on the stage. The audience will get to see the band rehearse and coming up with a song (chords, rhythm, and lyrics) throughout the show. All of that will be based on their different experiences and encounters with other characters. Aaaaaand maybe the characters outside the band will play an instrument or sing during the show. You have to come and see it!

What were some outside inspirations for this show?

When I lived in Peru I was in a ska punk band for almost eight years (shoutout to my band Na’ Que Ver), so I got pretty involved with the rock scene: having rehearsals and interacting with roadies, managers, and bar owners. Alan had a similar experience so he is very knowledgeable about those issues. I think being a band definitely shaped our vision for this show.

In addition, a big inspiration has been the movie School of Rock. It’s one of my favorite movies and it sums up the heart of this project: having different people with different backgrounds joining together for a thing they love—rock music. That scene when Dewey (Jack Black) is recruiting the kids to form the band, and they get to play a song, is just magical.

What is the range of musical experience between the cast members?

Can I say again how excited I am with this cast? They are incredible and I feel so lucky to be directing this group of people. We weren’t looking for professional singers or musicians, but people that can sing or play, and we found such a talented cast. We have improvisers with different musical experiences. We have singers, drummers, guitar and bass players, and keyboardists. We also have one or two “out of the box” instruments that we may use during some shows. One of my favorite moments during this process has been that some cast members used to play an instrument, and being in this show has helped them to start practicing again. And they are so good! We also have cast members that have no music background, but are so ready to jump in and sing their hearts out, dance, clap, or do whatever. Pure rock and roll attitude!

They are insane! We knew that we only had eight rehearsals before our first show. Since day one, we have tried to merge all of the aspects of the show. At every practice, we set up all of the instruments in our rehearsal space at CentroNia. The cast jams for a little bit, then they do some improv exercises and runs, then we go back to jamming. People end up singing and dancing. It feels like a party every time!

Our main goal with this show was to create an uplifting and empowering experience themed around a rock band, and this cast is up to it. You’ll get to see a comedy story that merges realistic and magical elements of the music world. You’ll get to see and enjoy a band full of improvisers playing live music and embracing their voices. It will be funny and it will be weird. Can’t wait for all of you to see it!