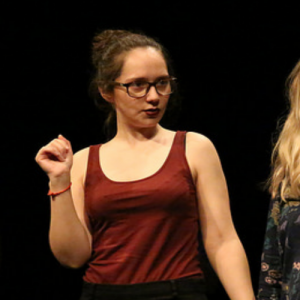 When Analía Gómez Vidal first dove into the world of improv two years ago, the Argentina native worried that her English would make the experience a difficult one. Now, as a workshop instructor and member of the WIT project In Lieu of Flowers, she is proving herself wrong.

To help share the joy of improv to other people who speak English as a second language, Annie began teaching free two-hour Improv for All workshops intended for people who are non-native English speakers. She recently spoke to us about using her experience as a player speaking English as a second language to encourage others to join in on the fun.

How did you first get involved with WIT?

I signed up for two Improv for All workshops in early 2016 because I wanted to make friends and find a hobby that would help me cope with the stress of grad school. After those two workshops, I felt so excited that I signed up for Level 1 that spring cycle. Since then, I have taken all the classes, volunteer a lot, and yes, made quite a few friends in the process, some of whom I perform with now (like my team CAKE!).

What has your experience been as a player who speaks English as a second language?

Let’s see how I can summarize it… When I first started, I was concerned that I would not be fluent enough to play. After the first few weeks in class, that concern was gone. I think one of the great things about improv is that the level of support and trust with your teammates empowers you beyond any language barrier.

I have been in scenes where I did not understand the cultural reference or didn’t know the meaning of what someone had just said. But I keep playing based on context, and I rely more on non-verbal cues to build up from there. The more I play, the more fun I have because I’m less in my head about getting things right.

What inspired you to start teaching ESL Improv For All workshops? 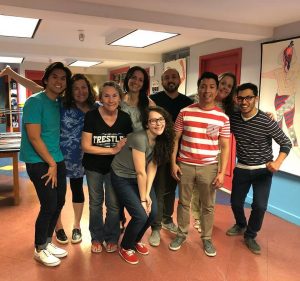 I had been participating in the diversity meetings in our community, and one issue I mentioned in that context was playing as an ESL speaker. What struck me was that given how cosmopolitan the DMV area is, and how many immigrants live here, the amount of ESL players is noticeably low.

After I finished taking classes in 2017, I started thinking how I could engage with improv from a different perspective. Since I love teaching, that felt like a natural fit. Then I realized that a good way of addressing the low amount of ESL players was to reach out to people who could be interested in playing, but felt doing it in English would be a challenge. So I came up with the idea of modifying the Improv for All workshop to adapt it for ESL participants, to show how you can communicate and explore improv regardless of language skills.

I told [WIT player, teacher, and board member] Ceci De Robertis this idea before one of our Sabado Picante shows, and asked her if she would help me with it since I had no experience teaching improv at the time. She was both excited and super supportive. We approached WIT about this in late 2017, and they have helped us make them happen since.

How has the community responded to your workshops?

This initiative has received a lot of support from people in the improv community, and them sharing it with friends and coworkers in social media and via emails has helped a lot. We have had varying attendance to the workshops (as it happens with most), but everyone who has participated brought such high energy and openness to play that even three-person workshops have been extraordinarily fun. There is still a lot of work to do, but we have had participants from many different countries and backgrounds, and every workshop has been a success so far. I look forward to teaching more of them, and to hopefully expand the set of options for participants in the area who are interested in playing. I think this has been a great starting point for it.

How do you usually break the ice at the beginning of a workshop?

As in any workshop, I start by telling participants about myself, and I ask them to introduce themselves. In this case, I ask them to share their names, where they are from, and what their native language is (and any other ones they speak, too). This helps us get a sense of the diversity in backgrounds and languages. I then explain to them what to expect from the workshop (tons of fun!), plus some ground rules to make it a safe and respectful space for everyone to make the most of it.

What is one piece of advice you have for new players who speak English as a second language?

I have been there, I understand how it feels to even think about it. But trust me, you should sign up. It’s worth it every time. It is hard sometimes to convey that message when people don’t see themselves represented on stage.

It happens to me sometimes, thinking that there are elements or experiences of my upbringing that won’t get to be played on stage unless I have more players who can relate to them through their own lenses. I want this (and future initiatives) to encourage more ESL players to take the risk, so we can have more of our lives represented on- and off-stage, and bring out the fun in them to the audience. At the very least, even if it takes us longer to get there, improv is also a great way of improving our English skills in the meantime.