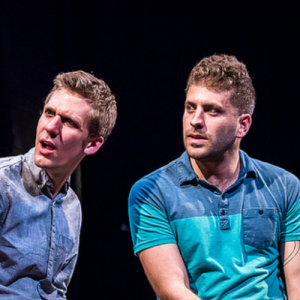 The cast of Love Onion is preparing to march to the beat of their own drum: literally. WIT’s current road show Interplay at the DC Arts Center, Interplay, welcomes award-winning drummer Tom Teasley to the stage for a four-night engagement in collaboration with the ensemble. Cast members Joe Dawson and Sam Bonar told us what we can look forward to.

What can audience members expect to see out of this collaboration?

Joe Dawson: A very integrated and fun musical performance. We thought about having Tom perform and then improvising, sort of alternating drums-comedy-drums-comedy, but he’s so good at improvising on about a dozen percussion instruments at once that we thought it would be more fun to blend the two performance styles.

Sam Bonar: We got nasty with it.

Joe: Yeah, real collaborative and loose. Love Onion talked a little about what might work before we met with Tom, and talked to him about what he felt comfortable with. Once we got into his studio, though, talking was less helpful than just jumping into dancing, doing scenes, and getting comfortable with each other.

How has Tom’s drumming affected the way you improvise? Was your scene work different?

Joe: Music is really useful on stage, in terms of conveying emotion and tone. A scene that is a little suspenseful or creepy without music gets really spooky with some high-tension music underneath it. Tom owns about a million instruments and can play them all well. He scores silent movies and accompanies plays and theater pieces.

Sam: It’s a pleasure to have so many sounds and vibes rolling in and out of focus. It really amplifies the weirdness and organic stuff Love Onion likes to do, as well as adding so much color and texture to everything.

Joe: Definitely. Love scenes are love-ier, drama is more dramatic. It’s a blast to play with a musician backing you up. All your decisions are reinforced by this awesome sonic backdrop. I want Tom to soundtrack my life.

What are you looking forward to the most as a part of this collaboration?

Sam: Ooh—we get to finally be as strange as we are in practice, but because there’s music it makes it more accessible. Audience should come prepared to be terrified and tickled.

Joe: We have at least three different techniques for playing with Tom, and I’ll spoil the surprise to reveal one, because I think it’s so freaking fun.

Every once in a while, Tom uses an instrument to become a character in a scene. Imagine a Peter and the Wolf kind of thing; a scene where one character is a cymbal or a bass drum or a slide whistle. And the other character is trying to get that slide whistle to pay for dim sum.

Get your tickets to see the collaboration here!