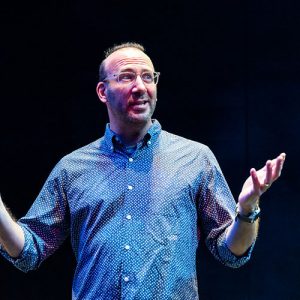 Matt's first steps in improv occurred as a member of a dramatically-inclined, high school-based, improvisational suicide-awareness troupe. Things have thankfully taken a turn towards the funnier since then.

Matt studied theater at Washington University in St. Louis, MO, where he was a founding member of sketch comedy troupe Kaktabülz and director of the first student-run musical in school history. While Matt has made up silly songs as far back as he can remember, his inability to remember written lyrics really paid off in 2008 when he was invited to make them up on the spot instead as a cast member of iMusical. When not improvising musicals, Matt also performs with balding improv supergroup The Four Heads.

Matt studied improv in Los Angeles with The Groundlings and in Washington, DC with Washington Improv Theater. Matt has also been a cast member of WIT’s space-prov extravaganza Starship Odyssey and is a former member of Nox!, The Score, and the long-defunct, badly-named, and rightly unmourned Psychochuckles.