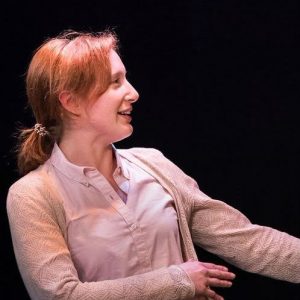 Emily can assure you there are no buffalos in Buffalo, New England is neither new nor like England, and New York City is a great place to meet a snake on the subway.

Emily started improv in college, but ditched it in favor of performing other people’s words (that had been written down in advance). Flash forward to 2013 when she decided that improv was vastly more fun and should be done more often. Since then, Emily has become a graduate of the Washington Improv Theater training program and has had the joy of performing in WIT’s Fighting Improv Smackdown Tournament.

When not found on the stage in one form or another, Emily can be found arguing with 3 year olds about the merits of using the bathroom before going out to play and spending the whole hot yoga class in a resting pose.