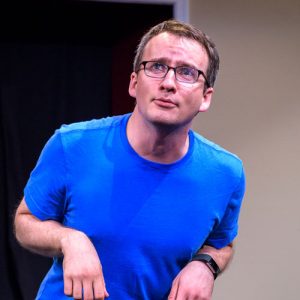 On what was mostly a dare, Chris auditioned in 2002 for Northwestern University's Titanic Players and surprised himself (and probably others) by actually getting cast. Improv has been a significant part of his life ever since.

Chris played for three years with the Titanic Players on the team Dr Flux and discovered the thrill of creating something new in the moment with a group of friends. Since then, he’s slowly made his way through the WIT curriculum over a period of many years, possibly setting some kind of record. Over the last couple of years, he’s enjoyed playing with the indie teams Huggy Smalls: the Notorious H.U.G. and Couch Money. He’s super excited to be jumping into the Harold program to learn and grow as an improviser.

Originally from Charleston, SC, Chris likes a slower pace, and one of his favorite Southern aphorisms is “I may start off slow, but by the afternoon, I’ve tapered off.” He works for the government and when meeting new people insists on saying the actual name of the agency and not the acronym, because you shouldn’t assume people know what government acronyms stand for. He is slightly irritated in sentences that end with propositions, but knows they changed that rule, right?