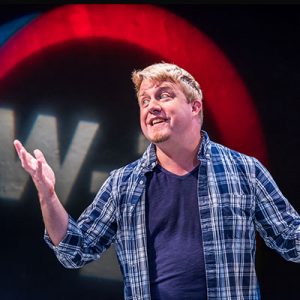 WIT Artistic and Executive Director Mark Chalfant: “I’m proud of the respect for the craft and community that are part of WIT’s DNA”

On March 20, WIT’s artistic and executive director Mark Chalfant celebrated his fifteenth anniversary as an employee of the organization. We took a quick trip down Memory Lane with Mark and learned about the path that led him to WIT, how WIT got to where it is today, and what Mark hopes for the future of the organization.

What was your professional life prior to WIT?

I worked through several jobs and departments at the International Monetary Fund, ending up coordinating interpretation services. Only in that last job at the IMF did I finally get to really use my degree in Russian Language and Literature.

How did you initially get involved with WIT? Had you done improv before?

A coffee-shop flyer led me to join a neighborhood theater group. Then the former artistic director of WIT (then dormant), Carole Douglis, did some workshops with that group. My first workshop with her was my first improv experience.

How did the transition to full-time artistic director come about? What was it like working for WIT in the early days? What were your biggest hurdles?

There was one core ensemble of players at one point, and all volunteered weeknights and weekends to grow WIT – trying to do more shows and teach classes, etc. But there was never enough time and we were all burning out. I was always one of the process people in the group and I was one of the first people to believe we needed to transition to having an actual staff to manage the company. It was a huge leap of faith at the time – both for the organization and for me. The big hurdles then were educating people about improv performance as a craft, and learning everything I could about how an arts non-profit is supposed to run.

When you think about WIT then and WIT now, what would you say is the biggest difference in the organization?

We really do have the strength of a huge, invested community now in a way that we did not then. The number of performers, teachers, students, audience members – it’s wonderful and is at a scale we could not really imagine back then. Plus, almost everyone has already heard of improv now, so we’re no longer starting at zero when we talk about the craft.

WIT has grown so much in the past 15 years. What are you most proud of that WIT has accomplished?

So many things. In performance, it’s the breadth of shows we’ve explored: sharp political satire, dark murder saga, abstract movement-based work. The growth and creativity of the performer community thrills me – and that only happened because of the huge advances and growth in the classes program. Shows and classes have always been our double-barreled mission. I’ve always been proud of the gender equity on WIT’s stage, now increasingly I’m becoming proud of the racial and ethnic diversity making up WIT. That is the result of a lot of diligent work from our Education team. I’m proud of the respect for the craft and community that are part of WIT’s DNA. On a personal level I’m happy for and proud of the many friendships and even couples and children that have come out of the community WIT creates.

What is your biggest hope for WIT in the next 15 years?

Sustainability. Part of that is securing a long-term home where we can thrive and grow our performance programming even more. We need city policies and development practices that value and proactively include the arts as an essential ingredient to vibrant city life. The other part of it has more to do with the city and our overall culture: we need DC to be more affordable for people of average means – those are our performers, students, and audience and we’ll fail if DC prices them all out. And to have a strong audience, we need live, intimate performance to remain a human experience that’s valued higher than streaming content like Netflix.

What is your most cherished WIT memory?

I was teaching a class, back in the old days when our classes were at the Universalist National Memorial Church at 16th and S NW. We were focusing on emotional statements and doing a series of two-person scenes in which each character would at some point say “I love you.” They could use whatever moment, tone, relationship they wanted. There was one student who was struggling – he kept hitting moments where his character could say it, but then he’d pause and say something else. The whole class felt the struggle he was having and when he FINALLY did it, everyone cheered. After class he seemed lighter and he confided to me that “that wasn’t a phrase we used in my family.” I had a long sobbing cry at home that night, and was really happy that our class had given him the opportunity to take a small step emotionally.

In the past 15 years, what if anything has surprised you about working for WIT?

Is there any aspect of your job or the organization that the WIT community might not be fully aware of that you’d like to tell us about?

It takes work. There’s a crackerjack staff of people who really strive to deliver WIT’s mission and there are systems and vital relationships we have set up to make it all possible.

The future is bright for the next 15 years of WIT—come to Teen Spirit: A Prom-Themed Fundraiser Bash for Washington Improv Theater on May 10 to keep WIT growing and going strong.