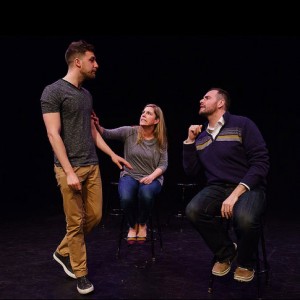 Submit your team for FIST 2016

FIST is WIT’s March Madness-style elimination tournament where improv teams of three (or fewer) members compete for the ultimate in improv glory. We’re expecting more than 200 competitors for this year’s competition.

Before you submit, please read all of the rules below to see how this whole crazy thing works. Sign up by Sunday, Feb. 7 at 11:59 PM.

The Fighting Improv Smackdown Tournament (FIST) is a bracketed tournament in which teams of improvisers fight their way up the brackets toward championship glory. Like college basketball’s March Madness, but with more madness. Teams advance or are eliminated based on anonymous audience voting. One team will become the FIST Champions, emerging to cheers, validation, and of course, glory.

What is at stake?

Did we mention Glory? The pure, unadulterated glory of victory. A kick-ass trophy or other ostentatious bauble of some kind. Some other tasty prizes, but not a mountain of cash. Also: preferential consideration for scheduling in WIT runs for the following year.

Who can be a team?

Almost anyone, as long as they’re here to do longform improv. Each team may have up to three players, of any experience level. One- and two-person teams are also legal, if that’s your thing. Each player may play on only one team – substitutions included. A musical accompanist counts as a player. An audience member counts as a player if s/he is brought on stage and performs.

Who can NOT be a team?

A cast that has already competed in FIST together. A team in which all players currently perform together in a WIT company ensemble.*
* These rules are to promote player cross-pollination, a main objective of the tournament.

What can we name our team?

Just about anything, but please avoid profanity and trademarks. Also, names that are very long will get chopped up or abbreviated in several uses. We cannot control this and we will abbreviate as we deem fit, so please aim for short. Names longer than 20 characters may get cut off on the bracket.

All FIST performances must be longform improvisation. There may be some devised or planned framing elements, including some connection to short-form game work, but shows that are not majority longform improvisation are not admissible and will be subject to elimination from the tournament. If you have any doubt whether your idea is enough longform improvisation, ask us at fist@witdc.org for a consult before you cement your format. Prohibited from all performances: any actual smacking down, glass or any easily breakable/hazardous materials on stage, breaking of bottles, use of fire/smoke or any manner of explosive device, any actions placing players or audience members in physical risk. Breaking these rules will result in disqualification of the team in question.

FIST begins on THU, March 10, 2016 and ends with the Championship Match and subsequent victory celebration on SAT, April 9, 2016. Matches will primarily be on THU, FRI, and SAT nights, likely at 8PM and 10PM. But depending on how wide the field of teams is, we may need to schedule matches on other nights and times. All possible dates/times are included in the sign-up query.

Please indicate any conflicts when you sign up. Should other conflicts arise, we will try to accommodate but we can make no guarantees. Once the tournament is underway, rescheduling is extremely difficult. Please contact fist@witdc.org with any questions.

One single substitution is allowed to each team, and only in the beginning rounds (1-3) and only in extenuating circumstances. The substitute must not already be a FIST competitor, eliminated or not. A given player may substitute for only one team per Round. No inanimate objects (mannequins, blow up dolls or whatever your sick minds may dream up) can be a substitute player. No substitutions will be allowed past the sweet sixteen round (you will simply compete with fewer players). If you do need to substitute a player, you must inform the FIST commissioners team as soon as possible. Following the substitution, the absentee member must return for the duration of the tournament.

How the Bracket Works

While the final bracket and schedule cannot be completed until all teams are submitted, this is what we expect: Teams in beginning rounds 1-3 will get 12 minutes each to perform for the audience. Beginning in round 3 (the Sweet Sixteen), teams will get 15 minutes each. Some rounds will likely include Grand Slam matches, where 4 or more teams compete and 2 advance. At some point, the matches will shift to two-team matches where one team is eliminated. There are typically no “play-in” matches or “byes” in FIST.

The tournament seeding (deciding which teams are in which brackets, and which teams oppose one another) is essentially random, though an attempt to balance out the brackets is made. Your self-reported years of performance experience and a subjective review by FIST commissioners will help determine your “seed.” Schedule considerations also play a part in which bracket quartile you are placed in.

All teams should be present at Source and checked in with the host 30 minutes prior to Match time. Teams will perform in the order listed on the bracket. Any changes to the order must be unanimously agreed to by all affected players and approved in advance by WIT, or by the Match host.

In Rounds One through Three​ each team plays for 12 minutes. Your time starts when you take the stage. There is a red-glowing digital clock visible from stage so you can note your time. You may call the end of your own show, or wait and the Operative in the Booth will black out your show at 12 minutes.

All teams when announced will be welcomed to the stage with a brief blast of high-energy music. If your team has a particular audio track you wish to use, please present it to the booth Operative at Source 30 minutes before curtain in one of 2 formats: a CD labeled with your team name with a note saying which track / how long to play, or an MP3 player device that does not lock, cued to the track you want, with the audio player at full volume and (if a phone) the phone ringer disabled.