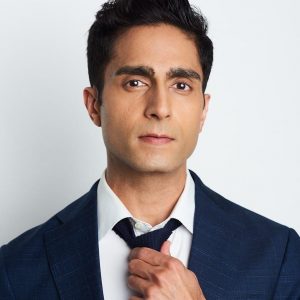 Actor Shravan Amin has a growing list of impressive acting credits including recent appearances on TV hits Ozark and The Walking Dead. If you flashed back several years ago, you could have seen him in person — in WIT classes and on improv stages around DC! Shravan recently talked to WIT about his improv background and how it has come in handy in his career as an actor, including an ad libbed line that made it into the final cut!

Since your time in DC, you’ve been booking a lot of awesome acting gigs. What are some of the projects you’re most excited about having been a part of?

Ozark was the most intense project I worked on. When I was cast last summer, the show had already been running for three seasons, and it was one of the biggest streaming shows at the time. Not to mention, I had a one-on-one scene with Laura Linney in a pivotal moment for her character, for the show, really. Despite feeling all kinds of pressure to be perfect, the scene turned out wonderful. In addition, everyone on set was super sweet and friendly. I took home a Clif Bar from craft services to celebrate.

Another gem of a project was a commercial I shot in London for FanDuel a few years ago. It was one of those experiences that make you feel like a celebrity: getting picked up to be taken to the airport, flying out to London, and staying at a fancy 5-star hotel. We were there for four or five days total, but there was only one shoot day. So that left three days to explore London. I saw Henry IV Part I at the Globe and The Comedy About A Bank Robbery at Criterion Theatre. I don’t think I’ve ever laughed so hard watching a show in my life. Then I just walked around London as much as I could, experiencing the sights and sounds the city had to offer.

Lastly, in May of this year, I shot a couple of episodes for a new limited series on FX/Hulu. It’s not out yet, so I can’t reveal any details. However, it’s probably the best work I’ve done so far on TV. The set design and the costumes felt like I was filming Star Wars. I can’t wait to share it with everyone soon.

Tell us about your time in DC and your improv background.

I first moved to DC in ‘04 to attend The George Washington University. I hadn’t done anything improv or acting related at all, either in high school, college, or immediately after graduation in 2008. In 2011, I emceed my sister’s dance recital, which ended up becoming a truly transformative event in my life. It sparked a creative energy in me that I obviously always had but was apparently never really tapped. Sometime after, I Googled “fun things to do in DC NOVA”. Improv popped up and I decided to give it a shot.

My first class was at The Comedy Spot with Liz Demery at the Ballston Common Mall. The mall itself was pretty dead, but there was a certain charm about that place that made performing there exciting. Later that year (I think we’re still in 2011), I joined the indie group The Improv Imps based in Fairfax, VA. Jennifer Crawford and Tim Trueheart led the group and I loved performing with them. We primarily did short form shows and my favorite spot to perform was at the now closed Epicure Cafe in Fairfax. To this day, I still miss hanging with them and performing at random venues (like a winery!) in Northern Virginia. I started taking classes at WIT soon after. In the meantime, I was also taking acting classes at Studio Theatre. I think at one point I also took some classes at DC Improv, and many random workshops that would pop up here and there.

I auditioned for the WIT Harold team in 2013. I didn’t get cast. You know, I finally got over it in 2021. Little did I know, however, that that would be my first of hundreds, if not trillions, of rejections that I’d soon experience in my acting career. So, thank you, WIT, for helping me build some character! Much appreciated. From 2013-2017, I focused primarily on stage plays in the DC area. I did, however, continue performing improv with the Imps, as well as some other indie groups, namely Bombay Vindaloo (a Bollywood-themed show) at WIT.

When I moved to NY in 2018, I continued my improv training at UCB, going through their curriculum. I auditioned for and got into the UCB Academy. My long tenure in the Academy lasted two and half weeks before UCB went under. I will say, though, improv in New York was great. There were jams 4-5 days a week at UCB, the PIT, and Magnet. I’d try to hit up as many as I could. PIT jams in particular were great because it just felt like a group of friends hangin’ out, chillin’. There was no pressure to impress anyone and so we all performed at our best.

As an actor, how has your improv experience been an asset?

Improv has been great for my confidence. There is a certain fearlessness that improv builds in you that you can carry outside, whether it’s in acting, other arts, or just in your life in general. The more you practice improv, the better you get in not overthinking your choices and just doing. For example, I really love the exhilaration I get when I’m asked to do a cold read. For those that don’t know, a cold read is getting a script and being asked to perform it pretty much right away with little to no prep time. In those situations, having an improv background is invaluable. You feel more confident in diving in and making strong choices about the character and their actions. You’re not thinking. Oftentimes, that performance is better than what it would have been if you had been given days to prepare.

“If this is true, what else is true?” How many times have we heard this in rehearsal or class? It’s what’s used to teach heightening and/or finding the “game” of the scene. I can’t tell you how game changing this has been for acting. In scenes, especially comedy ones, I’ve found myself instinctually heightening character choices throughout. Whether it’s a laugh or a tick that is repeated three times following a trigger, or a completely new choice based on what the character has already done earlier on, this principle has added more depth to the work I bring to the table.

Do you have any examples of times when you’ve used improv in your job as a screen actor?

Most recently on the set of The Walking Dead. During my scene, I introduce the main character on stage in a big hall. She then gives an impassioned speech, which shocks the audience. According to the script, the scene is officially over after her speech, but I improvised a line to button the scene (“Thank you, ladies and gentleman, we will not be taking any questions”). They ended up keeping that part in when the episode aired.

There have been plenty of other examples, including the aforementioned FanDuel commercial. The majority of the lines in the ad were of course scripted (we’re selling a product, after all) but the heightening, the listening and reacting, and the overall playfulness were all inspired by improv.

Is there a specific takeaway from your improv experience that has stuck with you in your career or in life?

It all comes down to just letting go. It’s something that was the foundation of what I learned at WIT and other improv classes in DC, as well as performing with various troupes. I’ve found that whenever I’m in an acting class or on set, when I have the entire scene planned out the way I want it to go or the way I think it should go, A) It never pans out that way and B) It feels forced. The emotions are forced, and they don’t come from responding to the truth of the moment, and the delivery of my lines feels rehearsed. And of course, you never want your lines to feel rehearsed; they should feel as if the character is saying it for the first time, in the moment as a response to the other character. So after you’ve done your training and your preparation, when you get on stage or set, you forget everything and enjoy the moment.