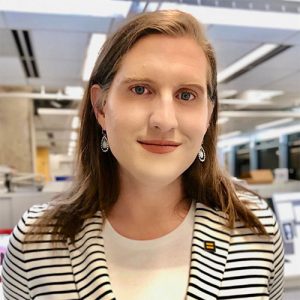 Washington Improv Theater is one of 19 grantees by the DC Mayor’s Office of LGBTQ Affairs in their recent cycle of awards for FY2023.

The grant will support two projects:

“WIT strives to share improv with different communities throughout DC and this grant opportunity will enable us to share performances and workshops specifically with the District’s LGBTQ residents,” said WIT Artistic/Executive Director Mark Chalfant. “Improv has something to offer everyone, and we hope to continue making improv more accessible.”

The grant-funded Ask Me Anything: Changemakers performances will take place Dec. 9 and 10. The Dec. 9 performance features an interview with writer and trans activist Charlotte Clymer (pictured above). Clymer is a writer, transgender activist, communications consultant, and military veteran. Her political and social commentary has been quoted by The New York Times, The Washington Post, The Guardian, and numerous other outlets. The December 10 performance features special guest C. Dixon Osburn. Osburn is the author of the Amazon best seller Mission Possible: The Story of Repealing “Don’t Ask, Don’t Tell,” an effort he led at Servicemembers Legal Defense Network.

The award will also fund a series of eleven workshops designed for the LGBTQ community. The workshops, which will be held at Studio Theatre, will be taught by LGBTQ teaching artists and will be open to LGBTQ participants as well as allies. The schedule and registration links will be posted soon.