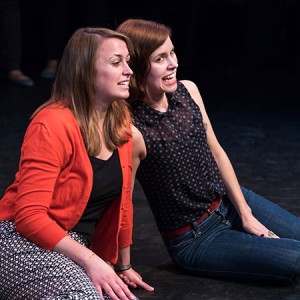 The October Issue seeks new talent to join its cast

Ari Koudounas: A real life Leslie Knope (and WIT board member) Beverly Crusher: An interview with the FIST X Champions

To audition, players must have completed the Harold at WIT or have equivalent experience at other theaters. Solid emotional believability, group chemistry, and sincerity will be essential. Originally WIT’s contribution to the Womens Voices Theater Festival, these auditions are open to female-identified improvisers only. The deadline to sign up for an audition is Wednesday, April 27 at 5 PM.

The all-female cast of The October Issue creates an improvised women’s magazine that gives an unvarnished look at life from a woman’s perspective. Based on audience suggestions, the cast creates this magazine-themed show, including articles, interviews, fashion tips, photoshoots, horoscopes and advice columns. Inspired, fun and Photoshop-free, the magazine is held to the highest standards of keeping it real and keeping it really hilarious.

Mandatory rehearsals are held the second Saturday of every month from 11 AM – 12:30 PM. Quarterly cast activities are also scheduled. Cast members must be available for performances during WIT runs, as well as festival travel and performances on an as-needed basis.