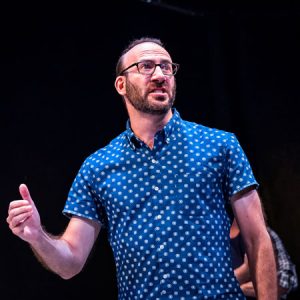 On Nov. 20, Washington Improv Theater company ensemble iMusical celebrates ten years of creating spontaneous musical theater. iMusical’s Tenth Anniversary Celebration, to take place at the GALA Hispanic Theater in Columbia Heights, is a fundraising performance that will feature the ensemble’s current cast as well as special guest alumni. All proceeds go toward supporting WIT’s creative programming including shows like The October Issue and POTUS Among Us.

Leading up to the big night, we’ve asked some iMusical cast members and fans to remember some of their favorite iMusical memories over the past ten years.

Mark Chalfant and Karen Lange did a scene once where it was slowly revealed that Karen had once been a man who was in love with Mark’s character. Her character had changed genders to try and be with him.

Over the course of the scene they slowly discovered that Mark: 1) was into Karen before the transition (but not as much after), and 2) had been in a horrible accident that resulted in the loss of his genitalia. It culminated in them singing an amazing duet about their feelings of loss over their love that could have been… and their body part that no longer was, with a recurring chorus of simply “It’s gone.”

Watching that ridiculous moment play out on stage was incredible. Neither of them had any idea that was where they were going. Each piece of information patiently led to the next piece and built upon it; each piece ratcheted up the absurdity, but somehow felt earned.

By the time the music started there was such energy in the room, and everyone was thinking the same thing: “Are they really going to sing a song about how they each lost their genitals?” And when they did — and it was about about that and so much more. It worked because they earned it and played it realistically, regardless of how absurd the elements of the story were. It was the high point of the show, and one of the funniest things I have seen us do on stage.

There have been so many amazing people in this cast over the years. I can’t wait to see people from different eras of the troupe come together on stage and see what happens.