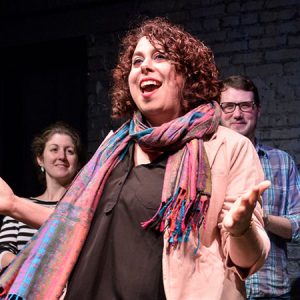 Washington Improv Theater is thrilled to welcome Jordana Mishory as its new operations manager. In this new full-time position, she will support and oversee projects across all of WIT’s areas of programming.

“Everyone on WIT’s staff is thrilled at the prospect of collaborating with Jordana on a daily basis,” said Mark Chalfant, WIT’s artistic and executive director. “Her thorough eye for detail, her bright disposition, and her penchant for finding fun and creative approaches to problems will all be great additions to the team. It’s especially nice to add a staff member who is already well known and deeply loved in the improv community.”

Mishory comes to WIT following nearly a dozen years as an award-winning journalist in Washington, D.C. and south Florida. For the past seven years, she has reported on acquisition, auditing and IT reform at the Defense Department with Inside the Pentagon. And while at the Daily Business Review in Fort Lauderdale, Fla., Mishory covered a $1.2 billion Ponzi scheme and exposed judicial wrongdoing.

A graduate of Northwestern University, Mishory has served on the District Improv Board since 2014, overseeing the selection committee and helping to organize the annual festival.

A long-time WIT teacher and coach, Mishory performs with company ensemble Love Onion and with the 2016 production of POTUS Among Us. Mishory has also performed with indie teams Cake Bagel, Sweater Kittens, and Jos. A. Banksy, among others. She has helped plan Improvapalooza for the past four years, and firmly believes it should be a national holiday.

“I’m over the moon at the chance to work for this organization that I adore,” Mishory said. “WIT has been my home, and its community, my family, for the past five years.”