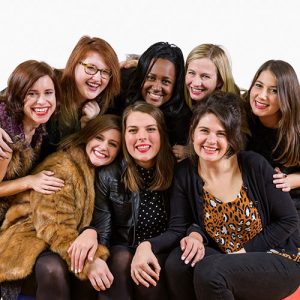 Hellcat began as a continuation of The October Issue—a show created by Jaci Pulice for the 2015 Women’s Voices Theatre Festival. The show followed the format of an improvised magazine, featuring special guests and audience interaction. The show continued after its initial run and modified its format under the direction of Dana Malone. In November 2017, the cast renamed itself to Hellcat and began a new format inspired by guest monologists’ real-life stories from their past using embarrassing journal entries and other source material.

“During The October Issue‘s initial run, The Washington Post called the cast ‘a remarkable group of funny women,” said WIT Artistic/Executive Director Mark Chalfant. “The cast and creative direction may have changed significantly, but that label is as true as ever. I’m delighted to spotlight this team’s phenomenal work and welcome them to WIT’s family of company ensembles.”