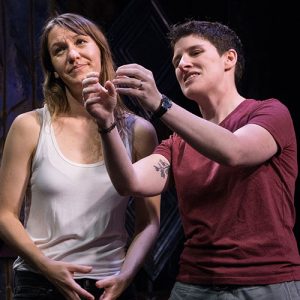 Greer Smith and Joe Uchno: It all began with "Unraveled" Sabahat Chaudhary and Marc Reber: From "not talking at an improv festival" to married with a toddler

The February-May 2018 cycle of WIT’s Harold team program will welcome 12 new players into the program and feature several changes to the composition of the teams. Every team in the program has a casting change.

While the total number of teams will remain the same, the teams TableCat and Work Wife will be retired and two new teams will be formed. In addition, players from continuing teams will be redistributed to both new and existing teams.

“The continued evolution of our Harold team line-ups is the product of player input, coach feedback, and evaluations of team performances,” said WIT Artistic/Executive Director Mark Chalfant. “As the Harold program team grows and becomes more and more fiercely competitive, we plan to continue injecting constructive change within teams to foster player and ensemble development in subsequent cycles. I’m very proud of the work Harold team players and coaches bring to the program and I’m excited to see these new combinations take the stage together.”

The new teams for the upcoming cycle are: