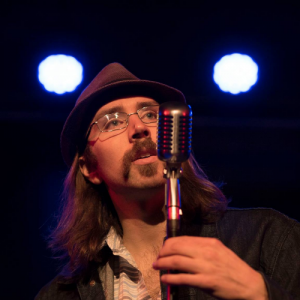 DC Native and WIT alum Connor Gorman brings Karaoke Storytellers to the WIT stage during Summer Escape. Part musical, part confessional, this show invites real people and interesting characters to share stories accompanied by defining musical tracks. Gorman, a founding member of then-Harold team Madeline, spoke with us about the birth of the show and why it’s a must-see.

For the uninitiated, what is Karaoke Storytellers? What does it mean when you say “this is a show where fictional characters are side by side with real people’?

It’s a simple concept where people get up and tell a five-minute story about a song and why it is meaningful to them (memories, phases of life, people they associate it with, etc.) followed by a karaoke performance of the song. The “catch” is some people telling the stories/singing are in character and others come as their everyday self. The only advice I give to people playing characters is to play a grounded perspective. It doesn’t mean they can’t have quirks/ idiosyncrasies, but they must play it as a three dimensional person with an emotional history. Otherwise it stands out from the rest (in the wrong way).

How did this show come to be?

You have to go back to April 2016 for it’s true beginning. I worked at a bar/ restaurant in downtown Chicago and a co-worker was moving to Atlanta. All the servers, bartenders, and cooks went to a speakeasy karaoke club down the street at 5 PM on a Sunday. As you can imagine, we had the place to ourselves. One of the bartenders got up and started doing mic checks (he was dead serious) and I thought “what if someone took karaoke as seriously as I took comedy.” In that one moment, this whole world opened up.
A month later we came up with a completely improvised web series and titled it “The Art of Karaoke.” Episode one featured me playing the character Franny Giroux and DC’s Mikael Johnson playing Kyle Fernandes. Episode three featured Rory Scovel playing Chet Mathieus. After Rory’s episode we decided to turn into an improvised feature length film and we are about halfway done with it. One of the things we discussed with the story was what to “develop”. In a normal film, you write the script and know where you are going, but we are improvising everything so we don’t necessarily know what happens. We call them developments because they are things we can make and follow in real time and capture their growth in the film (almost like a documentary). We knew it had to be a competition or a show, and we elected the latter since a competition would be the easy answer. Then we asked the simple question: what does karaoke at it’s highest level look like? We believe this is it. And so does Franny.

Was it hard to find people who don’t identify as professional singers comfortable enough to sing publicly for such a personal show?

Not at all. One of the things I have done with this project is go to karaoke 3-5 times a week as Franny (another one of the films developments). In doing that, I have found the answer to my original inspiration “what if people took this as seriously as I take comedy” is true. And in a fun way I (as Franny) have become a part of this wonderful community of karaoke enthusiasts. A lot of people that have performed in the show are people I’ve met around the community, and many of them have done the show multiple times. The first time you do it, it’s a little scary. After you talk for a minute you realize its impossible to bomb, because no one has huge expectations given the fact that it’s karaoke. They just want to hear your story and support you.

What makes a good ‘karaoke singer’?

Commitment. There are great singers who aren’t great at karaoke because there’s an emptiness to their voice. You can tell they’re just doing it to try to show people up. The best karaoke performance I have ever seen was a Japanese guy in his mid 50s singing Living on a Prayer by Bon Jovi. He couldn’t sing with any vocal accuracy, but he committed harder than anyone I have ever seen, and the place went wild. As Susan Messing says for improv “when in doubt, commit.” The same is true for karaoke.

Is there one thing in particular that everyone can learn from a night at a karaoke bar?

Just to let go and not worry about what people think. It’s a trait that you can’t quite put your finger on, but you know it when you see it. You can learn that performing in front of 5 people who aren’t paying attention teaches you as much as performing for 200 watching intently. More than anything, it’s good to put yourself out there and do something you may find uncomfortable. That’s where all of life’s good stories live.

What is your go-to karaoke song?

That’s a tough one. I’ll have to say Stubborn Love by The Lumineers. Why? Come to the show and you might just hear!