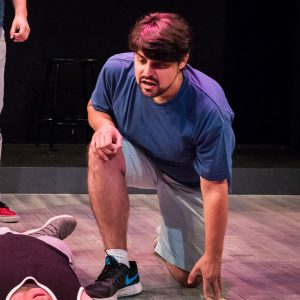 Alex Kazanas: An artist twice over

If you’ve seen this year’s Improvapalooza program, this coloring book is the creation of Alex Kazanas. A WIT graduate and cast member of Die! Die! Die!, Alex Kazanas uses his improv skills in a live event called Super Art Fight—a competitive show featuring visual artists making wild collaborative creations. In this interview, he makes his elementary school self proud as he discusses his improv journey to pure happiness and laughter.

How did you first get introduced to improv? Have you always been a performer?

My introduction to improv was probably reruns of “Whose Line Is It Anyway?” on Comedy Central. Back then I was convinced that if you’re truly funny, who needs a script, so I probably took it for granted that everything was made up on the spot. Unscripted stuff like Christopher Guest’s films and Curb Your Enthusiasm kind of helped me to dig deeper into that world. I didn’t really dip my toes into it until a friend invited me to play in during a practice session for a team she coached at Montgomery College. Naturally, it ended up being a lot of fun. Others had told me over the years that I’d be quite good at improv, so when I moved closer to DC I ended up taking classes at WIT.

I’d say that I’ve always had the heart of a performer, or at the very least I’ve wanted to make people laugh. I tried so hard to be the class clown back in elementary school, and I’d like to think I nailed it for at least 3rd and 4th grade. When making the transition to middle and high school, I became much more reserved as a person (out of fear of embarrassment, which is really silly looking back on it) and focused my energy on making people laugh through movies I’d make with friends for class projects. I still have the VHS copy of “Indiana Jones Rewrites WWII” somewhere in my closet. I assure you that it’s totally historically accurate.

Tell me about Super Art Fight and your artistic background.

The easiest way to describe Super Art Fight is probably “Pictionary meets Pro-Wrestling.” It starts with two artists, who are usually dressed as off-the-wall characters that are weird extensions of themselves. You know, like pro-wrestlers. We’re a motley crew of luchadores, pirates, valkyries, ninjas, and whatever “Baron Von Sexyful” considers himself to be. These artists face each other on a 12ft x 6ft wall of canvas armed with giant Sharpies. They each get a starting topic, which is typically something general like “robots” or “aliens.” Each artist has free reign to draw whatever comes to mind relating to their starting topic, and may “attack” their opponents on the canvas. For example, if I started out by drawing a giant robot, I could attack the opponent’s drawing by adding lasers or missiles to the equation. Or if the opponent hasn’t finished their piece yet, I could walk over and finish it for them in an interesting way, like maybe give it sexy legs and a tutu. To keep it fresh, every 5 minutes the topics are changed thanks to the “Wheel of Death,” a program we project to the side of the stage that’s pre-loaded with suggestions given to us from fans on the Internet. Topics include “Your opponent as a Muppet,” “Rejected Superheroes,” and “Fart Bus.” The whole 30-minute match is emceed by two commentators who give a hilarious play by play of what’s going on, and at the end the audience decides the winner via a decibel reader. It’s really something that begs to be seen rather than talked about!

I don’t think I can remember a time where drawing wasn’t my favorite thing to do over anything else. Cartoons and comics were and still are my main artistic inspirations. I never take animation and comics lightly because of the amount of work that goes into it, it’s really remarkable. So I would study art books and character designs, copy them, and eventually forged my own style, which is constantly evolving. I took studio classes in college where I got better at life drawing and anatomy, but I’m mostly self-taught. I try to draw something every day to keep myself well oiled, which honestly is 100% the best way to get better at something like that. I keep myself involved in the small press comic scene by exhibiting at conventions here and there to peddle mini-comics, sketch cards, and commissions. It was actually at one of these conventions that I discovered Super Art Fight, fell in love with it, and was determined to be a part of it.

Why do you love doing Super Art Fight?

It makes me feel like a rock star. Whenever you’d see anyone at a talent show growing up, they’d do something extraordinary in the realm of performance. Singing, dancing, reciting a monologue, juggling, something like that. I’ve always felt that my greatest talent was drawing, but how could you possibly do that in front of a crowd of people and keep them engaged? I’ve always wanted that, and with Super Art Fight I have it in spades. The roar of the crowd, the stage lights, and your own walkout theme music – it’s electric. I get to tell people that I’ve played The Black Cat or the Ottobar. It’s really cool. Performance is the greatest kind of high, but it’s increased ten-fold when you’re 100% confident in what you’re doing.

Performing aside, a huge part of why I love Super Art Fight are the friendships I’ve forged by being involved. It’s like a little family. We’re the most fun bunch of weirdos you’ll ever see when we’re all in one place. It’s kind of amazing when you find others who are just as weird and funny as you. The DC improv scene is very much like that, I think – nobody really cares what you do for a living. This community of supportive, like-minded people all having fun together and sharing a love of comedy and performance. That’s just the tops.

Has improv helped you at all in your Super Art Fight shows?

Oh, absolutely. Art Fight is basically improv with markers. It’s for sure helped me to think a lot quicker and outside the box when given a topic. “If this is true, then what else is true” is very much a mantra to have in your head when thinking of something to draw. Character game is also an Art Fight staple. When you’re on stage, it’s important to stay true to your character.  There are a lot of parallels to draw here. Pun definitely intended.

You recently joined the cast of Die! Die! Die! How has it been joining the cast and performing an improvised slasher movie?

Die! Die! Die! Has been an absolute blast so far! It’s such an airtight concept. When you can deconstruct a whole genre like that down to a formula, you can do so much with it. The slasher genre is ripe with so many character and situational tropes, so there are endless possibilities with what you can produce. I’m a big fan of movies in general, so the narrative progression of the show makes a lot of sense to me. And I mean, come on- who doesn’t want to ham it up on stage by dying in a gruesome way? Or even better, being the arbiter of a clueless teen’s untimely demise!

What was the last thing you saw or heard that made you laugh out loud?

It was a pie-in-the-face gag. My friends in the animation industry have been singing the praises of Spongebob Squarepants for years, comparing it to the comic timing of classic-era Simpsons. It was sort of after my time, so I enlisted the help of my cousin (who had grown up with the show) to give me a select few episodes to watch. The end of a particular episode has Spongebob tripping over a rock, causing a pie he was holding (that was, unbeknownst to him, a bomb) to land right onto his neighbor Squidward’s face. First you see the pie splatter, then it explodes, and finally we cut away to real 1940’s A-bomb test footage. The timing of it all was perfection, but the cherry on top was seeing the pie splatter. I laughed for a solid 2 minutes. It makes me happy that such a simple and classic comedy staple can be so timeless.