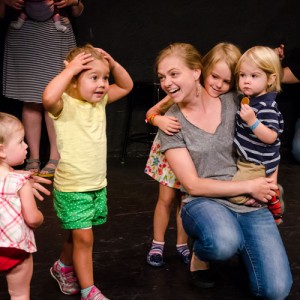 3 improv games to play with your kids

Running out of options to entertain your kids? Have they already watched Frozen a dozen times (or more?)

Here are three improv games that can help keep them occupied while stimulating their creativity. They’re best suited for kids six and up (but, hey, give ’em a shot with the little ones too!).

This favorite warm-up game underscores the idea that there are no wrong answers!

Come up with a category or have your kids make one up—something like “The Top Seven Ice Cream Flavors You’d Never Want to Try” or “The Top Seven Superheroes You’ve Never Heard Of.” Ask one of your kids to come up with the seven answers in this category.

Be sure to count off the answers after they’ve been said. You can even provide a gentle drumbeat by patting your hands on your lap while they answer (this helps raise the stakes).

For instance, for “The Top Seven Ice Cream Flavors You’d Never Want to Try” the kid might start off with “Broccoli and chocolate.” The answers will get sillier (and more imaginative!) from there.

This is especially good for older kids.  Two kids can play at a time.

The kids face each other and, on the count of three, each says the first word that pops into their head. If one kid says “pizza” and the other says “car,” then the goal of the next round is for both kids to say the same word simultaneously by guessing which word is “in between” those pizza and car. So, on the count of three, the kids might say “delivery” or “Domino’s.”

If it’s not a match, those two words serve as the basis for the next round (ex. what is the word in between “delivery” and “Domino’s”… perhaps “driver”?). Keep going til you get a match — and when you do, dance around chanting “We got a MIND MELD! We got a MIND MELD!”

If you’ve got three or more people, this is a great exercise to get active with!

Then, Person A decides who stays in the middle of the circle. For example, if they say “The Nut stays” the other two people (the ‘Tree’ and the ‘Squirrel’) go back to the edge of the circle. The person left in the circle repeats who they are (“I’m a Nut!”). Now anyone in the circle can add any idea that goes with a nut (you no longer stay with tree and squirrel). So the nut could, in the next instance, be accompanied by a chocolate chip and a pretzel (for a trail mix theme).

The game repeats that cycle. When the third person comes out and takes on a physical pose, the person who was left in the middle in the previous round decides who stays and the game begins again.

These creative games are great for keeping the littles occupied, but did you know improv can also help strengthen businesses and teams?

Learn how improv can help your company