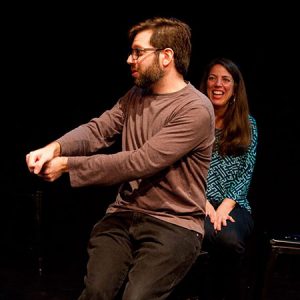 Spencer’s comedy career began inauspiciously when he inadvertently knocked out a classmate’s front tooth while performing a Bob Hope routine in his 3rd grade class play.

Though his performance focus soon turned to music, he displayed an intuitive sense of heightening, as he moved from a cringe-worthy emo band to an face-meltingly unbearable jam band. After nearly a decade away from the stage, he decided to take a final shot at immortal performance glory when he started taking improv classes at WIT, completing the WIT curriculum in 2018.

When not at his day job trying to fix student loan policy, you can find him performing with the indie groups Free Snacks and Sábado Picante. You could also find him at his house reading one of the 43 books he has checked out from the DC library, creating guitar loops on a crappy practice amp, or making incremental process writing one of three novels he has in the works, but you’d probably be very bored as those are all solitary activities.