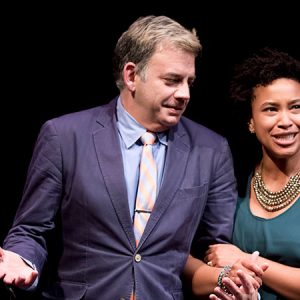 He’s performed with a number of professional improv troupes, including Loose Screws in Honolulu, Hawaii and The Oxymorons, a nationally recognized improv troupe in San Antonio. He was the founder and creative director of bright young things, an improv troupe specializing in long-form improv that played to audiences in Washington, DC, which also was the very first improv troupe to headline at the DC Improv. Shawn was also one of the founding cast members of WIT company ensemble iMusical, a nationally recognized show that improvises a musical (both music and libretto) based on a single audience suggestion. Shawn was also a member of ShawnMikael(s), a two-person troupe he formed with venerated DC improvisational actor Mikael Johnson. In addition to a performance schedule that has them playing to audiences all over the Eastern seaboard, ShawnMikael(s) has racked up a number of accolades during its short time in existence: the show it mounted as part of the 2011 Capital Fringe Festival found the duo being awarded four stars and named “Best of the Fest” by DC TheaterScene; finally, the duo have twice entered the Harrisburg Comedy Improv Throwdown, winning both times against stiff competition from troupes from Pittsburgh, Philadelphia, and New York City.

Shawn is the co-owner of The Unified Scene Theater, a longform improv theater in DC’s Bloomingdale neighborhood. He was the exclusive teacher of improvisational comedy at the DC Improv for more than 12 years, where he taught classes in beginning improv, advanced short-form and long-form improv, as well as improv workshops focusing on character, long form, and non-traditional improv techniques. His classes (and the numerous performances they’ve generated) have been featured in the pages of The Washington Post, The Washington Post Express, Washingtonian magazine, as well on Washington Post Radio, DC 101, WTOP Radio, Mix 107.3’s “The Jack Diamond Morning Show,” on The Food Network’s “Dinner: Impossible!,” the popular show “BroadMinded” on SirisusXMRadio’s Stars channel, as well as on such local media outlets as K Street Kate’s video weblog, and other local blogs, including WeLoveDC.com, among many others.