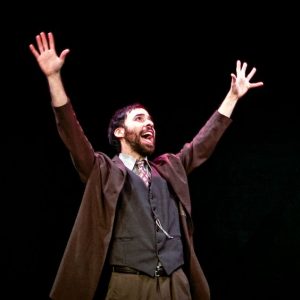 On stage since 2009, Michael vacillates between improv and scripted theater.

Michael began studying both improv and scripted theater at the same time. While studying theater at GMU, he began WIT’s curriculum in 2009. In 2010 (along with Paul Laudiero and Conler Mandt) he was a co-founder of GMU’s improv troupe, Mason Improv Association. He completed WIT’s (and GMU’s) curriculum in 2012, then moved to France for two years to study acting. At the end of 2014, he returned to the U.S. and began creating The Eulogy (theeulogyplay.com), his one-person show, which he toured around the world 2015 – 2016.

Michael is an internationally award-winning and acclaimed writer and performer who now vacillates between The Eulogy, scripted theater productions, and improv. He has taught theater with Acting For Young People since 2010 and has written and directed over twenty short plays for children.