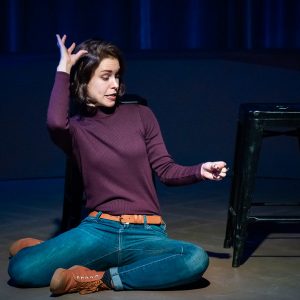 Jenna fell in love with improv when she took her first class with WIT in the spring of 2013.

Jenna is a member of WIT ensembles Hellcat and Nox! as well as indie team TFA. Many moons ago, her team Childish Things won the FIST XI Championship. If you see her on stage, she’ll probably be doing something weird with her face and body.

Originally from La Plata, MD, she has been told she has a southern twang, despite Maryland being a mid-Atlantic state. She has at least learned to say “wash” instead of “warsh,” like the rest of her family.

Here is a random list of things she loves: prairie dogs dressed as people, nu-metal, the YouTube clip of John Travolta messing up Idina Menzel’s name, the theme song to Hangin’ with Mr. Cooper, Ty Beanie Boos (and Balls), Keanu Reeves, that meme where Jamie Lee Curtis puts her finger up and then angrily drinks a beverage from a glass.