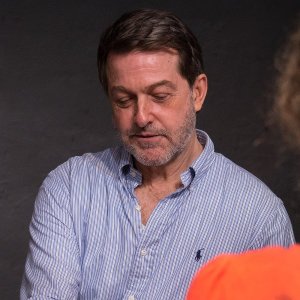 Charles St. Charles lived lots of places before coming to DC, including Detroit, Los Angeles, Rome, and Paris. His improv obsession though blossomed here in the nation's capital.

Washington Improv Theater has been like a sixth home to him. Before joining Season Six, he performed for two years on the WIT Harold team Spirit Bear. Outside of WIT (sometimes within), Charles performs with independent teams Press Play, Teenage Hand Models, Mr. Meaner, and Improvisers and Other Actors. He has trained at WIT, the DC Improv, and Upright Citizens Brigade Theatre’s Training Center in NYC.  He was in the first graduating class (2006) of the one year acting intensive at The Honors Conservatory at The Theater Lab School of the Dramatic Arts in DC, and he has performed scripted theater in DC, Virginia, and Maryland.

He is also a visual artist with a painting or two always on display at Touchstone Gallery.  Charles loves improv best, believes improvisers are his inevitable brethren and sisteren, and frequently can be seen hugging them — just this side of the limits of propriety.

He is a member of WIT’s Harold team Spirit Bear and independent improv teams Press Play, Teenage Hand Models, Mr. Meaner, Pimento, and Charles Xavier. He is a graduate of WIT’s curriculum and the Honors Conservatory at The Theater Lab School of the Dramatic Arts. He has also trained in acting, improvisation and comedy at DC Improv, Studio Theatre, Woolly Mammoth Theatre, Shakespeare Theatre Company, and Upright Citizens Brigade (NYC). He has appeared in several scripted plays and is a visual artist.

“Great motivator! Great insights to rules of thumb, tricks of the trade, etc.”