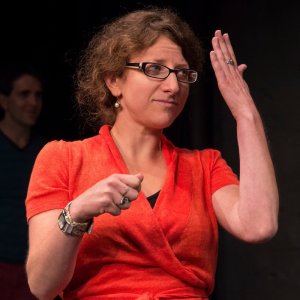 Ami Krasner was raised in Raleigh, NC where her sisters, brother-in-law, niece, and parents still reside. She has been performing improv since 2010 when she first started WIT's training program.

In addition to studying at WIT, she has been a teaching assistant for the theater and has taught children’s improv at Wobble Rocket Productions.  She has been a member of several indie troupes including Neighbors, Sweater Kittens, and Actors and other Improvisors.

If Ami was a candy bar, she’d be “fun-size”.  As an avid hula hooper and hug enthusiast, she’s happy to try to embrace you while hula-ing. She’s the proud parent of a turtle named Franklin, two beagle mixes with sexually ambiguous names (Rogue and Daeni), and was once name-dropped by Jon Stewart.