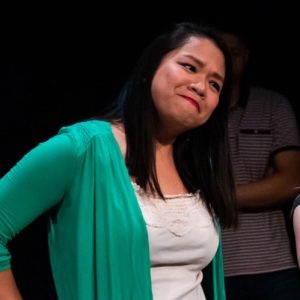 Asian Yankee Southerner who is an analyst for pay and a comedian, chef, and party planner for play.

Andrea got her comedy career started doing open mic stand-up in Charlotte. She made the rounds of a few DC comedy theaters. Doing a class at DC Improv. serving on a house team for a couple seasons at LIT. Currently she is a Lizard Girl at WIT and a member of the indie all-girl team The Quitters.

When she isn’t performing comedy, she’s bakin’, brunchin’, and ballin’. She can talk your ear off about things to do around town, commercial real estate, and cooking.