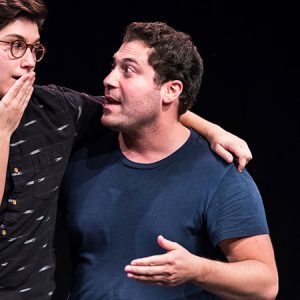 Adam is originally from Tacoma, Washington, where he became a master at blowing glass and drinking coffee. His performance career began at age 12 when he was cast as Monkey #2 in his middle school's rendition of The Lion King.

Adam started taking classes at WIT in 2015 so he could learn how to stop violently shaking his hands and knees when speaking publicly. He performs also with the indie team Company Blood Drive, and would be perfectly happy marrying anyone on the team.

When not on stage, Adam can be found face-timing his young nieces, where they share a common bond of making fun of his older brothers.