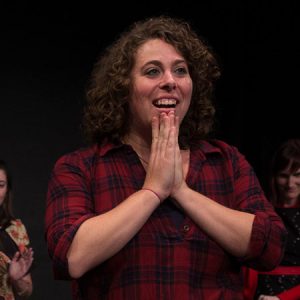 One might think Jordana Mishory does improv 24/7 with balancing her ensemble Love Onion, indie troupes Cake Bagel and Sweater Kittens, as well as teaching for WIT. Still she fits in her day job as a managing editor for Inside the Pentagon. Learn about this improv rockstar as she shares how she began her improv journey, uncovered Ponzi schemes, and explains the rewards of teaching a Harold.

What inspired you to sign up for your first improv class? Do you have a background in theater or comedy?

I have always loved comedy and performing. When I was a kid I wanted to be the next Stephanie Tanner and begged my parents to take me out to L.A. and get me an agent so I could be a child actor. They wisely said no, so I had to suffice with local children’s theater and then plays in my middle school in high school. I also wrote for two sketch comedy groups in college — but unsuccessfully because none of my sketches ever made the final cut. I remember covering Northwestern’s improv troupe Mee-Ow for our school newspaper and wishing I could be a part of it, but never having the gumption to try out.

About a year after I moved to DC, my friend Amy was telling me about a guy she was interested in when she mentioned in passing that she took a free WIT workshop. LIKE A JERK, I made her stop telling me about the guy to tell me more about the improv workshop. We signed up for the following semester, and I just fell madly in love with the art form, and haven’t stopped since. I just love the camaraderie and the creativity and the playfulness of improv—not to mention the phenomenal improv community in DC.

Who is your improv hero?

Abra Tabak. She is an improviser at UCB in New York for Grandma’s Ashes (one of my favorite troupes) and I want to be her when I grow up (in a non-creepy way!). She is just so bold and fun and positive on stage. She also taught my UCB 101 class and was fantastic. Every time she said something that I also say in my classrooms I gave myself a mental gold star.

As a managing editor of Inside the Pentagon, do you get to use your improv skills at work or in your life outside of improv?

Improv helps me stay more in the moment, really listen to what’s going on and react to the last thing that happened. It helps in my job during interviews to stay focused on what’s being said and to tailor follow-up questions appropriately.

What’s the most interesting story you’ve covered as a journalist?

After college I spent four and a half years as a reporter in South Florida covering the courthouse that was home to the Anna Nicole Smith body custody trial. South Florida is a happening spot to be a reporter. There’s a reason why there’s a Twitter feed dedicated to newspapers stories featuring Florida Man—because there are sooooo many crazy stories.

One of the first that comes to mind was covering a $1.2 billion Ponzi scheme orchestrated by high-flying Fort Lauderdale lawyer, philanthropist, and major Republican backer Scott Rothstein. When the story broke in fall 2009 after Rothstein absconded to Morocco, the law firm basically imploded. I spent the next six months tracking how Rothstein allegedly funneled millions of dollars into campaign coffers through law firm partners and looking into how he pitched his Ponzi scheme to potential investors.

I also wrote a set of stories about how a new program designed to represent poor people wasn’t working. The Florida Legislature created a new office for defendants, including those facing the death penalty, who couldn’t be represented by the public defenders. However, the office was a mess. It was bleeding attorneys—a number of them were fired, while others quit citing bad management. In addition, the office (which was located on one of the ritziest streets in Fort Lauderdale) didn’t have basic amenities like Internet for months. In an attempt to interview the head of the office, I cornered him in an elevator, but he escaped. You’ve never seen someone push the door open button so quickly! What was really wonderful though about these stories was that they made the decision-makers take note of the problem and look into finding new solutions.

As a writer, do you have any favorite improv or comedy books?

I actually haven’t read that many improv books (although I keep buying them! I have about five of them sitting in a giant pile on my night stand unread). I did read Mick Napier’s book Improvise: Scenes From the Inside Out during jury duty a few years ago, and really liked his philosophy of just do something.

That being said, as a kid I was addicted to two comedy-esque books that I read dozens of times. The first is Dogs Don’t Tell Jokes, a young adult novel about an awkward seventh grader who does a stand-up routine at his school. Even when I knew the punchline to the shaggy dog joke he used, I would giggle uncontrollably. I was also obsessed with Jerry Seinfeld’s book SeinLanguage which is crazy because I barely watched his show.

These days, in lieu of reading improv books, I just watch a ton of Fuck That Shit (A Comedy Team) on the YouTubes.

You have a wonderfully contagious laugh that makes the audience laugh harder with you in shows. What’s the last thing that made you laugh out loud?

I recently went glasses shopping at Warby Parker with two of my closest friends Chandrima and Brent because I needed new glasses (an obvious reason to go glasses shopping). Every time I put this one pair with greenish frames on my face, my friend Chandrima would go “Classic Jords.” And every time I would put on the pair I ended up getting she would go “This is serious.” Ends up she didn’t even like the classic pair the most, she just wanted to emphasize how they were glasses I needed to own for the weekend. Who owns weekend glasses?!

I feel like this is a you-had-to-be-there story. But if you were there, you would have been giggling, too.

As a WIT teacher what have been some of your most rewarding teaching moments?

This may sound like a cop out, but all of them are. Watching improvisers be able to do things at the end of class that they couldn’t do at the start of the term is a fantastic experience every time—even moreso now that I’m teaching Harold. Helping to demystify my favorite format is one my favorite things. That “OH, WE GET HOW A HAROLD WORKS!” moment is such a delight. I also love watching showcases where everyone is just having fun with each other. During shows I’m always watching the backline because I love seeing people react to their teammates on stage. Seeing my students enjoy the heck out of each other is always my favorite part.