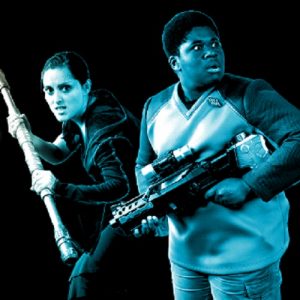 Starship Odyssey: The Final Mission is an improvised live summer blockbuster that spans centuries and star systems; that explores what it means to be human. Each night a new mission, that starts with your suggestion,  but no one knows how it ends. Debuting during this summer’s performance series Improv Saves the World, Starship Odyssey is part of WIT’s Directors Series, a program designed to create new shows by giving directors (including first-time directors) the opportunity to pitch and produce an original show.

We asked the director of the project, Denny Johnson (former WIT ensemble Commonwealth, Going to the Movies Alone), some questions about his sci-fi favorites, production wish list, and pet peeves.

This is the second in a short series of Captain’s Log entries leading up to the premiere. Read the first in the series here.

First up, you mentioned that Star Trek is the beginning and ending of your sci-fi cred. What is it about Star Trek that you love?

Star Trek was a very hopeful show for me when I was younger and was lacking in hope. It showed a future where we’d moved beyond the racism, sexism, and classism of today. As a kid, I was obsessed with the tech and the futuristic elements, but looking back, I think the theme of “it gets better” is what I gravitated toward.

Every week, your cast shares some sci-fi favorites — scenes from movies, TV shows, favorite books, etc. Is there anything you’ve discovered thanks to your cast that has become a new favorite of yours?

Jeff Bollen shared a Twilight Zone episode, which has gotten me into watching both the old and new Twilight Zones. Jonathan Murphy and Erin Smith both shared books that are now on my reading list. What’s great about the book report, though, is that you are exposed to great works of science fiction and get a window into what makes that cast member tick. It’s intimate and revealing.

Sci-fi as a genre has its list of tropes. What are some of the tropes the audience might see you play with?

Every trope you can imagine and some new ones. The swashbuckling captain, the not quite human android, the warlike race. But we’ve also had a captain with an addiction problem, a female high chancellor who gets off on punishing men, and an entire race with a flatulence problem. This show both tackles society’s issues and puts the “art” in “fart.”

In a world with an infinite budget and time, what would you add to Starship Odyssey?

A comfortable director’s chair?  I kid.

I think I would rent out the Kennedy Center for the summer to give this cast and crew the size of audience they deserve.

What is something that annoys you about sci-fi? This is your opportunity for a rant. Go.

When it doesn’t go big. You’re in space. You’re in the future. You’re traveling through time. Anything is possible. Go. Big.

Tickets are on sale now for Starship Odyssey: The Final Mission, part of this summer’s Improv Saves the World.