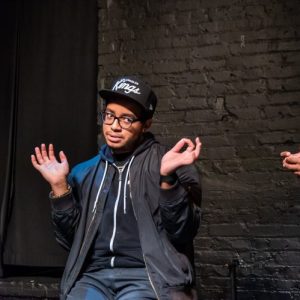 What are the origins of Lena Dunham? How did you all get together?

JAMAL NEWMAN: I took a trip to LA for an entire week, the same week Donald Trump was going to be inaugurated in DC. While I was in LA, I made it a point to try and see a “White Women” show. Ended up watching a show called “Obama’s Last Week in Office.” It was a night of three all-black improv troupes and I had never seen that before anywhere. I’ve seen all black improv troupes, but the entire bill was all black improv troupes and no overlap of performers. So I got to see Arcade Currency, Obama’s Other Daughters, and then White Women closed out the show. For me it was the most moving night of improv I had ever watched. This was way before Geoff Corey was doing back-flips on stage, mind you.

After the show I caught myself saying, “Man, I wish there was an all black team back in DC,” almost as if I was asking it as a favor to the universe to deliver to my feet. Then I remembered an Obama quote about change. “Change will not come if we wait for some other person or some other time. We are the ones we’ve been waiting for. We are the change we seek.” So I was like, “Oh wait…I can be the person who makes that happen.” I then spent the entire rest of the week planning out who I was going to invite and the idea for the Lena Dunham Improvapalooza show, which is all I had [at the time]. An idea of one night of an all-black team doing improv in DC. Then I sat on the idea for like six months. When Palooza came around, I emailed all the black improvisers I knew when I was coming up or had met who I thought would be right for the team, and the rest is history.

For the uninitiated, could you explain the name of the group?

JN: So we are paying homage to the LA team “White Women.” When I was thinking about a team name similar to that, Lena Dunham was the first name I thought of. Then I ran it past a few people and they seemed to think it was funny so I went with it. This is not a team name paying tribute to Lena Dunham. This is just about winking at the inspiration for the team which is “White Women.”

How would you describe a Lena Dunham show?

JN: Like being at a cookout where you know everybody’s name and everyone is a character.

KRYSTAL RAMSEUR: Lena Dunham shows are bold, physical, and challenging the idea of what it means to be black. We’re trying to make a dollar out of fifteen cents.

How long have you been performing together? Has your show or format evolved or changed since you started out?

JN: I believe it will be two years this August that we have been together. Format really hasn’t changed other than the questions we may ask the audience. One change we have started doing is if we feel like you aren’t describing a black friend and instead are just describing a black co-worker we may move on to someone else in the audience. Our show depends on being able to provide specific details of friendship so that’s what we seek now.

What are you looking forward to as part of the featured ensembles program?

JN: I’m most looking forward to possibly inspiring someone else the same way a night of being able to see an all-black improv team inspired me. Maybe another all-black team will be formed in DC. There isn’t a law that states there can only be one. Or maybe a person of color will be inspired to continue to pursue improv comedy because they saw our show and hopefully liked it.

KR: Each member of Lena Dunham can remember the first time we saw someone that looked like us on stage and how it felt to finally feel seen. Our hope is that by becoming the first all black featured ensemble, other black creatives will know that there is space for your voice and your talent.