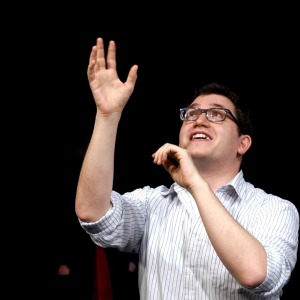 WIT Profile: Love Onion’s Stephen Carter on growing up weird, taking off masks, and being a politico

Stephen Carter has been an avid fan of improv since he was a little kid. Now, he puts his knowledge of the craft to use as a performer and teacher at WIT — and in his work in political communications. In both cases, he says, the question that motivates him is, “What makes somebody care?”

You’ve been teaching and performing improv for about a decade. How did you first get into it?

It all started catching reruns of the British version of “Whose Line is it Anyway” in elementary school and thinking it was funnier than any other show. For a weird, shy kid, seeing people being that funny and charming while making things up on the spot was not just eye-opening, but my only pathway to not being a lonely grown man who owns more than ten cats.

Flash forward through awkward puberty and a weird metal phase. Some friends and I formed our high school’s first short-form group, and I got into my college’s improv group my freshman year. Around then I started getting frustrated by the limits of the form and we transitioned to long form, performing Harolds and even getting the school to pay for some trips to Chicago for workshops.

You work in political communications — specifically, as the director of communications for the Democratic Party of Virginia. Do you use anything you’ve learned from improv on the job?

New students might be surprised by just how much a person continues to learn from this art form, no matter how long you’ve been doing it. What’s something you recently learned, or that you’re working on in your own performances?

Oh man, yeah, there’s always things to improve and learn. I know every few months I’ll develop a new tic that I tend to rely on in performances. A few years ago it was being obsessed with the language and grammar of characters. Then I spent the next few months trying to make it more of a tool and less of a crutch.

Right now it’s being too heavy handed with giving myself a “deal.” Also, as Love Onion can tell you, I’m trying to break out of obsession with taking off a mask and/or forcing some kind of dumb button or twist ending when it doesn’t necessarily belong. I’m basically an improv M. Night Shayamalan right now and I need to cut that shit out.

One thing I’ve recently learned, which isn’t groundbreaking or anything, is just how important it is that your characters care about something in scenes. It’s such a maxim of improv that it’s almost a platitude, but I’d say I recently really understood its importance.

You mentioned Love Onion, a WIT ensemble you’re a part of. You also perform as part of the WIT project Die, Die, Die. Tell us a little bit about each…the style of improv each thing calls for, and what’s fun about it. Do you like playing in different kinds of shows, or does it put you in your head at all?

I think the benefit of having a short form background is that I’m pretty adaptable to any kind of show.

Die, Die, Die is my girlfriend’s favorite show I’ve ever been in. It’s fun because it has a structure that’s built in and a narrative arc that doesn’t require a ton of work. But that means having strong characters set up in the first scene and being incredibly supportive is a must. Both are things I struggle with so it’s a great show for me.

I’ve been on Love Onion for two and a half years. We’ve been through so many incarnations with new casts but at its heart it’s always had the same sort of goofy yet grounded soul. More than anything, it’s been amazing to try different formats and evolve with other people while retaining our core character. It’s definitely been the best improv experience I’ve had so far.

I haven’t found joy in anything since the Seahawks lost the Super Bowl.

Nothing’s fair in love or sports. Cheer yourself up by signing up for the WIT newsletter, where we’ll introduce you to the awesome people in our community, share information on upcoming shows and classes, and more.

Do you want to give improv a try? Our Foundations of Improv class is registering now. Some sections are already close to full, so don’t delay!