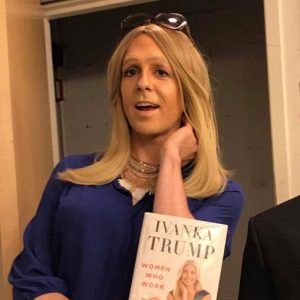 Q&A: David Steib Talks About His Starring Role in Ivanka! The Musical

In WIT’s three-week Rise Up! show series, dozens of improvisers use comedy to explore the world of politics. One improviser, David Steib created a solo musical show—Ivanka! The Musical—that finds him dragged up as Ivanka Trump and singing solo songs with an accompanist. WIT talked to him about the show he created, why he created it, and how he navigates politics in the improv world.

How long have you been doing Improv, and why did you start?

I’ve been doing improv for about seven years now. My boyfriend is the artistic/executive director of WIT, and so I started watching a lot of his shows when we began dating almost nine years ago. I was spending so much time at the theater that I thought to myself, “this looks like fun. I should join in.” From there, I worked my way through the WIT curriculum and eventually started performing with indie troupes.

You’re performing in (and created) a show called “Ivanka! The Musical” in WIT’s Rise Up! series. What was the inspiration behind this show?

I saw a one-woman, improvised cabaret show at the New York Musical Improv Festival in 2015, and I thought it was a really fun format, singing loungey songs made up on the spot with content coming from audience interaction. Then, in April of 2016, I saw Joey Arias channel Billie Holiday at Halcyon Stage Cabaret in DC. He was dressed in drag, and his voice passed as that of Billie Holiday. The show was disorienting and a study in empathy. It cemented the longstanding respect that I have for drag.

The last year has made many Americans feel helpless and depressed as we watch the erosion of the rule of law, of civil rights, of science, of decency, and of the highest office in the land. I work at a nonprofit that advocates on behalf of immigrants, and still I feel helpless. I am on the board of several organizations that fight for equality and access to justice, and still I feel helpless. In February of this year, I went to the Jewish Community Center of DC to see the movie “The Last Laugh,” a documentary that essentially asks whether it is ever acceptable to approach the Holocaust with humor. It’s a question that has very different answers for very similarly situated people. I created “Ivanka! The Musical” out of desperation, seeking a way out of the very dark place that we are in as a nation; a way out for the audience and for myself. The escape may be temporary, but it may also offer a roadmap for sanity and survival through what I fear is a worsening situation.

You also performed this show at Improvapalooza. What’s your favorite memory from that show?

My favorite memory from improvapalooza was when an audience member mentioned her husband’s snoring, and the first words of advice out of Ivanka’s mouth were, “My husband went to Harvard.”

Because you don’t know the political leanings of everyone in the audience, are there any specific approaches you take when combining comedy and politics? Are there any lines you make sure to never, ever cross?

Hopefully, regardless of your political leanings, you are able to laugh at absurdity when you see it. There’s usually a lot of absurdity attached to public figures, regardless of politics. This show looks at Ivanka, the author; Ivanka, the daughter of a billionaire; Ivanka, the businesswoman who said in June, “I try to stay out of politics.” The approach that I have taken is “to hold as ‘twere the mirror up to nature,’” as that seems to provide plenty of material. For me, the line that I do not cross is making fun of people who are disenfranchised or who are the victims of systemic discrimination and inequality.

What’s the biggest challenge about doing improv in musical form? How about the best part?

Making up lyrics on the spot is the hardest part of doing improv in musical form. Ideally, the lyrics are pithy yet meaningful (maybe even a metaphor), are repetitive but not boring, and rhyme while not rhyming just for the sake of rhyming. Easy, right? The best part is riding the natural joy and energy that comes along with music.

What is your absolute, hands down, favorite thing about doing improv?

My favorite thing about doing improv is having designated playtime —when your life is overly scheduled, sometimes you just have to schedule in silliness.

Buy tickets for the next showing of “Ivanka! The Musical” here!