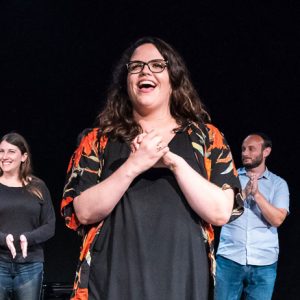 The original WIT show You Are Afraid of the Dark debuts this week for a limited run of four performances. The brainchild of director Katie Ozog, the show draws inspiration from the nineties Nickelodeon show Are You Afraid of the Dark?, which follows the spooky tales told by a group of teens called The Midnight Society.

Ozog spoke to WIT about the origins of the show and what audiences can expect.

What inspired the idea of a show based on Are You Afraid of the Dark?

I was inspired to create this show after my friend Allie and I went to watch some episodes of Are You Afraid of the Dark? at Suns Cinema a few autumns ago. The tiny theater in Mount Pleasant was absolutely packed with fans of the show who were ready to hunker down with some beer and relive their greatest childhood fears. We had initially planned on staying for 1 or 2 episodes… but 5 episodes later we were still there and an idea was born.

My day job is in the television industry and I’ve always been curious about mapping TV episodic formats onto improv and sketch. Are You Afraid of the Dark? immediately strikes a nostalgic chord among a certain age group, so it seemed like the perfect opportunity to pull from for a special project.

What about the show inspires you?  What aspects of the TV show do you want to make sure come through during the improv show?

What I love most about the original TV show is how it oscillates between the world of the Midnight Society and the world of the tale itself. You have the various teens of The Midnight Society with their own trials and tribulations, who gather weekly to tell a scary story. We never see this group in any other setting, and it’s fascinating to think about how they might interact at a place like school. Are they friends? Do they ignore each other? Is the society a huge secret from their other friends? I love how they set aside their differences at the fire to listen to a tale.

It’s also fun to watch how the themes from the banter at the fire seep into the evening’s story; that’s definitely an aspect we’ve tried to infuse into this improv version. If you’re a fan of the show, you’ll recognize many of the key elements in our project. We’ve been chanting “SUBMITTED FOR THE APPROVAL OF THE MIDNIGHT SOCIETY, I CALL THIS STORY THE TALE OF…” together for weeks now to get the authentic verbiage down. If you’ve never seen a show, you’ll still have a blast watching a spooky ghost story being made up before your very eyes.

Tell me about the rehearsal process.  How are you getting into the ‘spooky’ mood?

Our first rehearsal was actually just the cast gathering at my house to eat pizza and watch episodes of Are You Afraid of the Dark? We also talked about whether or not we believe in the supernatural and where we feel the most creeped out (some examples: costume shop of a theater, closed shower curtains, being the only one awake on an airplane in the middle of the night). We’ve had a grand ole’ time scaring ourselves at practice… it’s strangely delightful to see the dark twists and turns people come up with for these stories.

I have personally gone off the deep end this month and leaned in hard to Halloween. I’ve been watching tons of Are You Afraid of the Dark?, as well as classics like the original Omen and the new Netflix series The Haunting of Hill House. Bottom line, I’ve been freaking my housemates out with my viewing habits. Anything in the name of research, right?

How has the cast contributed to the shape of the show through the rehearsals?

The cast, as well as the assistant director Justine Hipsky, have been instrumental in shaping this show. It’s been a collaborative effort through and through and I’ve had the best time getting to know these players and see them shine in this genre. We’re all genuine fans of the original series, so it’s been a lot of geeking out over our favorite episodes. One of my absolute favorite things about this process has been hearing feedback from the improvisers to figure out what’s working and which parts needs more tweaking. We’re so lucky to have such a stellar cast for this run.

Do you believe in ghosts?

You Are Afraid of the Dark runs for four performances during the WIT Road Show.