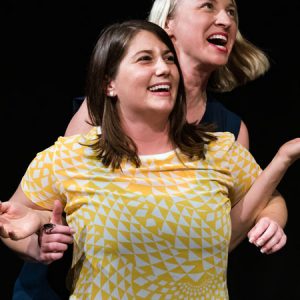 Justine Hipsky: Five Ways Improv Made Me a Better Educator

The WIT performer and faculty member shares how improv helped her connect with her students. She currently works as an advocate for youth civic engagement, but was formerly a DC Public School teacher.

I can say with certainty that teaching 100 (rightfully) skeptical 18-year-olds was the hardest job I’ll ever do (when I taught them they often seemed to have more immediate interests than learning about the differences between dual and cooperative federalism).

In my earliest teaching days, I was plagued with uncertainty. I wasn’t entirely sure if I was supposed to smile. I wasn’t sure if I’d actually learned anything about content-area literacy or human development in grad school. Or if I even understood federalism after all and oh my god what had I done and who on earth had let me have my own classroom?

But these are five ways in which I know that improv made me a better educator.

1. The Confidence to Fail

About a year into teaching in DC, I began studying at WIT to make friends and see if my middle school acting chops held up. What I didn’t foresee was that the more I moved through the curriculum, the more I found myself taking ownership of everything.

In learning how to improvise, you bring only yourself—no scripts, no props, no plans. Building characters, relationships, and worlds out of thin air helped me to realize that every single thing in my life that’s come before this moment has prepared me for this. We all have endless experiences, knowledge, and skills that are truly unique to ourselves, to our own stories. And that makes each of us invaluable to the spaces and communities we are a part of. This revelation allowed me to work with my students in a whole new light.

As my belief in my own skills and leadership grew, I was more willing to take risks from day to day. Failure in improv is a constant. We take a leap and sometimes we land and sometimes we eat it (big time). In front of an audience no less! The same is true of the classroom. Some days, you think your lesson on John Locke’s theory of natural rights is going to be life-changing, but alas, the eighth student in a row just asked you for the bathroom pass. Other days, you watch a room full of teenagers debate a landmark Supreme Court case with straight-up fire in their eyes, citing the constitution like they just passed the bar exam. I discovered that when I was willing to take those leaps, it paid off (big time).

Improv is all about the ensemble, not the individual. I don’t need to control everything or make every decision because other people also have ideas, and quite often, even better ideas than I do. Imagine that!

This applies to our young people too. They are not apathetic and they have ideas – they’re just not usually invited to contribute! When I became more comfortable creating lessons that allowed students to be in the driver seat, their level of investment increased. Instead of lecturing on checks and balances for 50 minutes, it’s far more impactful to let groups of students represent different branches of government and have to discover those relationships and barriers themselves over the class period. It can feel a little messy and scary to give up the power to control every aspect of a lesson, but the bulk of learning happens when people are invested and engaged in actively seeking to answer their own questions.

As a teacher, I asked a lot of my students. I asked them to be open to each other, to share and defend their views, to read aloud even if they were nervous, to be willing to make mistakes. That’s a lot to ask teenagers who are constantly petrified of feeling silly or looking “stupid.”  And it’s a lot to ask of adults, too.

Improv is nonstop practice in baring your emotions, potentially saying “the wrong thing,” and looking completely ridiculous. But the real magic is in all of us doing those things together. As a teacher, it was up to me to create a space where vulnerability was welcome. It wasn’t a perfect process, but I found the more I was willing to be silly in front of my students, to be honest with them when I made mistakes, the more they felt open to doing the same.

If not-great improv and not-great teaching had just one thing in common, it’d be a lack of presence. One of the basic tenets of improv is to always be 100% in the moment—listening and responding to the last thing said by whomever you’re sharing the stage with. This way, you’re honoring each others’ choices to create something together, piece by piece

It’s easy to be caught up in my own individual agenda of what I want to say and do next in a scene, or what exactly I might have wanted to get through in a lesson that day. However, when students would come in having seen something in the news that intrigued or worried them, the best thing I could do is to let that spark discussion and build momentum off of that interest, not squash it just because I had a different plan for that day. In the worst cases, students were not able to focus on a lesson because something traumatic had happened in the community. On those days, an agenda did not matter. Being 100% in the moment, listening and responding, did.

Improv gifted me a far less linear way of seeing my role as a teacher. I was pretty much constantly pocketing exercises and activities from improv rehearsals and classes to bring back to my own classroom. This was the greatest gift of all because so many of my students benefit from kinesthetic and interpersonal approaches to learning. There are endless games and exercises that are perfect for team-building and creating healthy classroom culture, all of which I happily utilized at the beginning of every new semester.

The first time I had a major breakthrough using improv games to actually reinforce material was on an exam review day. My students were in small groups working through study guides before we played jeopardy, but they kept getting stuck and couldn’t find their notes or their readings from certain lessons. I grabbed four chairs and brought them to the front of the classroom. I started playing a silly taxi driver character and picking students up. In character, they had to tell me all about their job as a Senator, Congressperson, lobbyist, etc. It was amazing. We had a blast and they remembered that content for the rest of the year. Surprise! Young people can learn and play at the same time!

No matter your job, you can learn something through improv: sign up for a class!