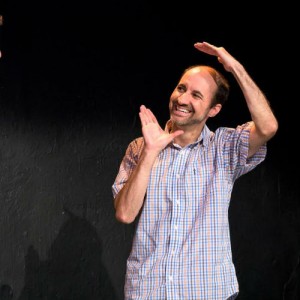 Jason Walther talks stand up vs improv, performing with a stutter

Jason Walther is a stand-up comedian and improviser. In this interview, he talks about the differences between the two and how each informs the other. Jason, who has a stutter, also tells us about an improv workshop he led at the National Stuttering Association’s annual conference.

You perform both stand-up and improv. What appeals to you about each?

With improv, it’s the sense of play. When I first started taking classes, all these childhood memories of me playing with Transformers and G.I. Joe’s popped up. My friends and I would have these epic stories with Snake Eyes riding Optimus Prime to battle and then “Oh no, the Decepticons!” And we’d pretend there were explosions, and other boy fantasies. (Actually, now that I think of it, the stories weren’t really epic. Almost every story was, “Good guys smash bad guys explosion explosion,” and then we would have a snack.)

But that feeling of play is what drew me to improv — having a space to build a world with someone and talk in a silly voice if you want, while agreeing and honoring everything your scene partner does. Improv is like the perfect blend of being a child and an adult.

With stand-up, it’s mostly about self-expression. Sometimes what motivates me to go up is just wondering if other people will think what I find funny, is funny. There’s also the challenge of taking a joke and making it a little funnier each time. I never had a joke that was as good as it could be the first time I told it. It can be a pain to work on a joke because they are never really finished, but it’s satisfying to rewrite a joke to a point that it gets consistent laughs.

Also, my mom never loved me, so I seek approval from strangers. (That’s not true. She was great. Hi, mom!)

Is it hard to switch gears between improv and stand-up? Like, if you had to do an improv show right after doing a stand-up set — would that be hard? Do you think improv helps with your stand-up, and vice versa?

At first, doing both was like patting my head and rubbing my belly at the same time. For stand-up, I would practice “patting my head” in the mirror for hours, go to an open mic night at a bar, get on stage by myself, and either get laughs or someone telling me, “You call that head patting?!”

Then I would go to Belly Rub (improv) practice, and catch myself “patting my head” — like starting scenes with pre-planned ideas and trying to say something funny, rather than reacting to the moment. It made improv more difficult, and took me about six months to learn how to switch back and forth.

But after I did, I gained something from both. Stand-up has made me more comfortable on stage. I’m okay starting a scene and no one coming out at first. It just feels like the start of an open mike. Also, I enjoy introducing my group and chatting with the audience a lot more than I used to.

Improv has helped my stand-up a lot. This is probably going to come back to haunt me, but I no longer fear hecklers. I rarely get heckled, but I feel confident handling anything unplanned. I have a stutter, and one time I was stuttering a lot and I could tell the audience was very tense. My jokes weren’t getting the usual laughs. So I stopped my set and said, “Obviously, I have a stutter. Anyone have any questions about stuttering?” And some people raised their hands! So for the rest of my set, I just gave funny answers to people’s questions. There’s no way I would have had the confidence to do that before improv.

You’re co-teaching your first class with WIT this spring (a level two with Margaret Lee). Has teaching improv changed the way you think about it at all?

Yes, way more than I would have guessed. I love improv, but before teaching, my improv knowledge was kind of superficial. I could do it, but early on I realized I didn’t have a deep enough understanding of improv to teach it. So I started reading more about improv, talking about it with friends, and thinking about why some scenes work and others get off the track.

I still have a ton to learn, but already it’s made watching improv more fun. I feel like I learn something every time I watch a show, and I didn’t feel that before teaching. It’s really clear to me now how much of an artform improv is.

You recently taught improv at a conference for people who stutter. Tell me about that. What did you cover? How did it go?

Yes, I ran an improv workshop for the National Stuttering Association’s annual conference last summer. When I was thinking of taking an improv class, I had a lot of fears around my stuttering. What would happen if I had a long stutter in a scene? Is it something that would get in the way? Would people even want to go scenes with me?

I held off starting improv for years because of those fears. And I thought, “There’s probably a lot of people who stutter who want to give improv a try, but have similar fears.” So I applied to run a workshop and hoped some people showed up.

Maybe it was because we all have something in common, but everyone was relaxed and laughing a lot. One of the fun moments was during (the improv game) “Yes, Let’s!” when everyone was pretending to fly the same kite. I’m going run the workshop again this summer.

A lot of famous actors talk about how acting helps them with their stutter. Is stuttering a challenge for you as a comedian, or is it easier to manage onstage than off?

My biggest challenge with stuttering has been having the courage to stutter. I don’t stutter much when doing improv, but I used to hold back from entering scenes because I was scared to stutter on stage or in class.

I slowly realized that the person who cares the most whether I stutter or not is me. I’m not saying I like it when I stutter on stage. I don’t. But it’s also not a big deal either. That’s one of the biggest lessons I gained from improv and from talking with people who don’t stutter but have similar fears. As my two-year-old niece said, after spilling some milk: “It’s okay.”

Tell us about one of your favorite improv shows, or moments — either one you were a part of, or that you watched.

One of my top moments is with my old Harold Team, Spirit Bear. I forget how it started, but near the end of the show, one of us started singing “You Got What I Need” by Bis Markie. We all joined in, and it’s how we ended the show.

Probably something involving a cat jumping a a box. Okay, not probably. I love Maru.