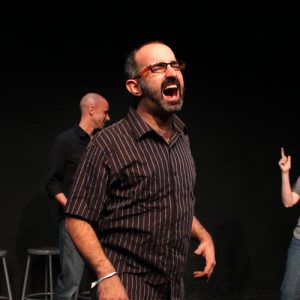 Topher Bellavia is a three-time FIST champion, having won the tournament in 2007, then in 2010 with Meanwhile, Back at the Ranch and in 2011 with Bipolar. Like his Bipolar teammate Mikael Johnson, Topher got to pick the winners before the cast lists were released. So, using just the team names, here are his FIST 2015 predictions, which were based solely on the teams that used punctuation in their names. (PS — Get your tickets here!)

Exclamation points. These are used when the team name is too uninteresting to stand on its own! If it sucks, you might as well yell it for attention. Notice the three marks in that last name. It is so boring it needs an extra two. First round out:

Too many words!!! Tearing the ballot will be too confusing. Second round out:

TWO interrobangs?! None is enough. I bet their format is called “Confused and then Alarmed.” Zero round out:

One of these possessives’ is dangerous. Neptune’s wrath is fierce, so Kimmy gets buried:

I don’t know what this means. If the question is common, Google results are going to give Peter Poon‘s architecture firm a lot more web traffic. They’ll reach the third round:

This sounds like a record about a venereal disease. After some cranberry juice they’ll be back on their feet for the fourth round:

Congrats, you used the second line of characters on a keyboard. Bravo for your creativity. I see a three-way fifth round competition:

The punctuation is just wrong. See if you can spot the error after the name and before the suffix. Semi finals:

Umlaut. This surrealist Magritte inspired meta-masterpiece is a shoe-in. I hope they all wear bowler hats. See Treachery of Images for reference.