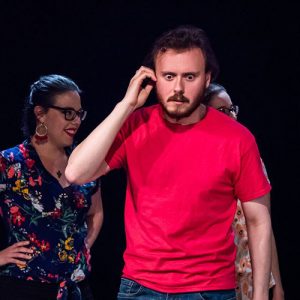 Mikail is a DMV native who fell in love with performing at an early age. In case you're wondering, which he knows you are, it's pronounced "mih-kyle fall-ah-slee."

Mikail was an avid thespian in high school where he performed in plays, musicals, and free form cabarets. He got his start improvising with New & Improv.’d of James Madison University. He was also a performer & videographer for the school’s sketch team, Maddy Night Live. Mikail completed the WIT curriculum in August 2017 and has participated in FIST and Improvapalooza.

Mikail works in public broadcasting. Personal interests include punning, traveling, mashing songs together, eating everything in sight, and zoning out. Throw any Spongebob quote at him and he’ll tell you the episode it’s from.