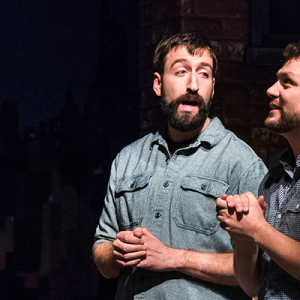 After living down the street from the Improv Olympic in Chicago and being too intimidated by the head-shots in the stairwell, Michael fled Chicago for D.C in 2013.

Michael enrolled in WIT classes in 2014 thinking he could improvise just as good or better than his roommates. He completed the WIT curriculum, earning such praise from his instructors as “Good effort!” and “What is that thing you’re doing with your face?” Michael has performed in Improvapalooza with the indie troupe Stovetron.

Off stage, Michael is a certified urban planner who focuses on making things a wee bit better for pedestrians, bicyclists, and transit users. Michael enjoys fresh fruits and the occasional fresh vegetable.