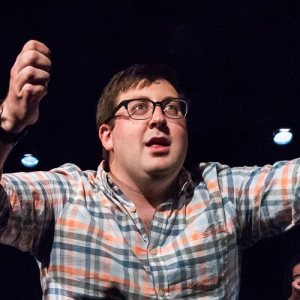 A critically acclaimed improvisor, Jeff Friedman was once named as "also a member of the troupe" in his college paper, and has won such improv awards as "most likely to to say no in a scene."

Jeff began improvising when he joined American University’s Mission: Improv-able. Mission: Improv-able was a highly dysfunctional troupe, something they proved when they made Jeff a director. Following Jeff’s graduation from college he went to NYC where he took classes at UCB. This was a time in Jeff’s life when he said to himself, “Yeah I could be an improvisor for a living. Who needs money anyway?”

After realizing that money is an important factor in surviving our modern-day society Jeff moved backed to D.C., got a paying job, and started taking classes at WIT. Since being a part of the D.C. improv scene Jeff has been a part of indie teams such as Indoor Voices, Hunky Jesus/Definitely Not A Cult!, Alex Jones-prov, and EVERYONE DIES.