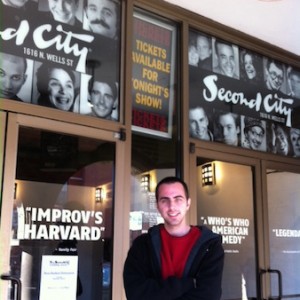 Not only is Anthony Cusumano a student in Katie Rush and Alex Beard’s Level 4 Ensemble class, he’s also a filmmaker. Anthony is currently at work on a documentary called “You Can Make This Stuff Up,” which follows the lives of five students from high school improv teams. We caught up with him recently to ask him about the project.

Tell us a little bit about your documentary

The documentary is called “You Can Make This Stuff Up,” and it focuses on five students from high school improv teams in Loudoun County. We go through their stories, how they discovered improv, and their advice for anyone who might be considering trying it. In addition to the students, we talked to some of the coaches, and they had some great insight on the benefits of improv beyond just performing and making people laugh. One of them is Alex Beard, who’s a performer and teacher at WIT. He has some cool and thought-provoking observations on how to approach improv in ways both simple and complex, and no, I’m not just saying that because he’s my level 4 teacher right now.

What was your motivation for making a documentary about improv?

I pretty much have been obsessed with comedy since I saw Tommy Boy in 2nd grade, so I’m always looking to do things to surround myself with funny people and explore comedy on a deeper level. And I think improv is one of those things that a lot of people are familiar with, but they don’t really realize what goes into it. When I started taking improv classes, a friend of mine was like, “If there’s no script, can’t you just get up there and do it?” So I was hoping to inform people in an accessible way. And honestly, a large part of it was to educate myself too. I had just started taking WIT classes last fall, and I figured any opportunity to see and talk to people about improv was worth taking.

The other part of it is that I’m not really sure how many of the students in these schools know that this opportunity is available to them. I couldn’t tell you whether or not my school had a team when I was in high school. There’s no way I would have had the confidence to try out back then, but knowing how beneficial improv has been for me on so many levels in the past year, I want to encourage anyone who might be interested to go for it as early as possible. It sounds cheesy, but the coolest thing would be if someone sees the documentary and it motivates them to try out for the team. Or better yet, if they’re at a high school that doesn’t have a team, to approach the drama director and start one up.

What did you learn through the process of making the movie?

It was pretty cool to see the different motivations everybody has for doing improv. I think we interviewed about 20 different students before we settled on the ones we chose to feature, and the range of responses when we asked why they auditioned was a lot more varied than I expected. I figured at that age it would mostly be theater students trying to boost their acting skills, but you had some who wanted to get out of their shells, some who went just because their friends were trying out, and one girl who only went because her teacher offered extra credit to anyone who auditioned. And of course you see all that in any WIT class too. The best groups at any age level are the ones with a nice mix of the super-extroverts and the comedy nerds and the people just looking for an outlet to goof off for a couple hours each week.

What would you say is the most important lesson gleaned from your improv experience?

The biggest thing is definitely learning to be comfortable putting myself out there and into situations where I don’t know if I’ll succeed, but realizing that A) trying can be its own success, and B) making mistakes is the most effective way to learn and retain something. It’s easy to get discouraged in life and in improv, but any time you go up there and give it a shot, you can chalk it up as a win. Succeeding at anything at this particular moment is less important than making sure you go out there and do it again. Unless you’re getting married, or pitching in game 7 of the World Series, or you’re the lawyer for the defendant in a death penalty case. Those are things you probably don’t want to screw up right now. Other than that, feel free to make mistakes. It’s good for you.

Unleash your creativity with a Foundations of Improv class at Washington Improv Theater! The fall term begins in Sept. 14 and classes are already filling up. Sign up for a class today—no experience required!

You CAN Make This Stuff Up – Improv in Loudoun County High Schools from LCPS-TV on Vimeo.

You may have seen improv on Whose Line is it Anyway, but many LCPS high schools also showcase these on-the-fly performances. But there’s a lot more to improv than just making people laugh. Meet Ryan Bultrowicz (Loudoun County High School), Amber Lambie (Heritage High School), Jacob and Kaitlyn Senchak (Dominion High School), and Zack Wold (Briar Woods High School) and find out why everyone would benefit from taking improv.