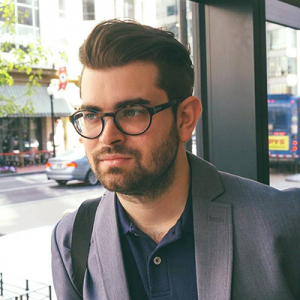 The first three performances of WIT’s thriller Citizens’ Watch received rave reviews from audience goers, due in no small part to the show’s elevated production values. Ray Simeon, a graduate of the WIT curriculum and a frequent booth operator, designed the lighting and sound for the show—adding a layer of drama and atmosphere from the booth without being seen by the audience.

Ray talked to WIT about his favorite moments in the show and the creative process from the technical side of Citizens’ Watch. 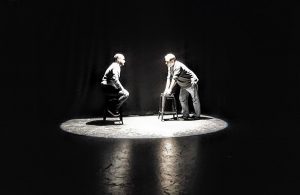 Had you seen Broadchurch before Michael Hendrix approached you to work on Citizens’ Watch?

No, I hadn’t. I did some quick research on it and was hooked based on the trailers. I did end up watching both seasons of Broadchurch and do now consider myself a fan. I have always been interested in the aspects of how improv can also take audiences through all ranges of emotions while creating dynamic stories, so I was pretty excited from the moment the idea was brought my way.

How did you approach creating the sound and lighting design? Tell us about the creative process.

So, Citizens’ Watch, for me, is a culmination of the creative learning I have been able to do throughout 2016 at WIT.

FIST 2016 was the launching point where I began making sure the little aspects of sound and lighting all fit the thematic elements of the show, from the playlist used for house music to how I announced the hosts. I wanted it all to have a point. This continued throughout the different runs where I was able to use lighting elements to accentuate teams and players to make the reality they were creating that much more engaging for the audience. A Love Onion show, for which I was in the booth, stands out as an early example of what I mean. This was a show where one of the premises was Sam Bonar’s character being able to do stand-up; he began the second beat by grabbing a stage mic and I blacked out the stage and hit him with a center spotlight the moment he hit the center spot. To me, all I did was bring the improviser’s idea to a more concrete visual experience for the audience. I think that early on, both audience and improvisers were a bit shocked, but that’s what made it even more fun.

Later I had the great opportunity to be in the booth for a number of iMusical shows where, again, lighting in particular spotlights and different wash colors can just take up the already amazing performance to make it feel even more like a scripted musical. And finally, POTUS Among Us was huge for me and brought me back to the audio technology (I had some experience with it in undergrad while working at a radio station) that I am also using in Citizens’ Watch. Being able to work with Mark Chalfant and Melanie Harker and, really the entire cast, taking the audio experience for the audience to a new level, and creating a system of listen and react audio cues, has been an amazing and really fun achievement.

Citizens’ Watch was about merging everything I had previously done from a tech perspective and not only doing it all in one show, but incorporating a variety of aspects at the same time and still adding more. With regards to the lighting perspective, I wanted to make sure we used archetypal aspects that all audiences would almost subconsciously attribute to a more dramatic tone. From the audio standpoint, I had two major objectives: pay homage to Broadchurch but, more importantly, make Michael Hendrix’s vision come to life. I studied the types of music used in Broadchurch and let that guide my audio decisions.

Finally, by seemingly luck of timing, I saw A View From the Bridge the week before Citizens’ Watch debuted. It’s an Arthur Miller play, so it’s dark in substance and edge-of-your-seat anticipation permeates the show, much like Citizens’ Watch, but the musical element that spans throughout A View From the Bridge is a simple beat to a snare drum whose snare is turned off. I loved how its simplicity allowed the actors and the audience to stay in the moment of the words being said but started an almost internal feeling of dread. So, this element was added to Citizens’ Watch, but instead of a drum beat, it is simply a note on a piano that is used across almost all of the audio in the show. This simple note seems to foretell upcoming events and can be manipulated throughout the performance.

What’s it like executing the lights and sound during a show that is improvised? You’re really a cast member who isn’t on stage.

And I do feel that way. Lights and sounds are simply the vessels with which I communicate on stage, especially since every word can mean so much and have an impact on how lighting and audio elements can help continue to engage the audience in the world we are creating. It’s the culmination of amazing casts having agreement and me being able to further make those moments and stories feel like a theater experience that happens to be improvised.

What’s your favorite part of the show from a technical perspective?

My favorite part is the interrogations and leading into the possible reveal of the murderer. The way Citizens’ Watch is constructed, it’s an amazing adventure for everyone involved since only the murderer knows who they are until the end of the show. The stage picture of the interrogations is so wonderful in my eyes and as the person being interrogated goes into flash back mode, and the blue wash comes on and the sound comes on. I think everyone is holding their breath—even me at times.

What have been some your favorite moments from the show so far?

There are great moments from each show that have been amazing, but here are a few quick hits; definitely not an all-inclusive list.

As an improviser one thing that sticks out to me, from the first show. Brianna Lux, who was the victim, had a great call-back to the minor detail of having new shoes in her awesome murder scene with Katie Rush. It was brought up at the beginning of the show in details [as the detectives described] the body but, for the most part, was ignored until that moment; it was mind blowing.

Another moment that comes to mind is the murder on the second night. It was the first time we used a gun as the murder weapon. I had spent a long time finding audio I thought would not only be realistic but super impactful. When it finally was used, the visual of seeing the jump-out-of-the-seats moment the audience had, made all that time spent worthwhile (there are a lot of gunshot sounds out there, in case you didn’t know).

And finally, the audience has had an audible gasp every night when the killer reveals himself through a monologue. When Elijah revealed himself on night three, there was even a slight “no no no…’ from someone sitting near the booth. These moments stand out but there are so many more! Progressive nuns, Batman, a husband having not seen his wife during the show though both were interrogated… and the list goes on.

One last note, though I know it is outside of the scope of questions, it can’t go without saying that I would like to send huge Thank You’s to Mark Chalfant, Michael Hendrix, and Dan Miller (who actually sent Michael my way) for giving me the opportunity and the artistic trust to work on this project. Also, a huge Thank You and much admiration for the entire improviser cast of Citizens’ Watch who have trusted the process and accepted some seemingly kind of out-there ideas from me to be incorporated into their great performances.

Citizens’ Watch is a part of Seasonal Disorder. There are three more performances in the run.