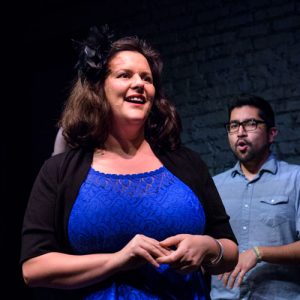 Upon seeing a WIT show, some audience members might think that improvisers are immune from nerves.  But even experienced improvisers still get stage fright before shows. We asked our player and teacher community about their experiences with stage fright and how it has effected them on stage and off.

How would you characterize your stage fright?

Pete Bergen: It was pretty bad. I would fear judgement, hug the wall, and overthink.
Darnell Eaton: Very bad—so bad that I poop my nerves before every show. I think it manifested based off of self-judging decisions or always trying to make the right/smart decisions on stage, wanting to fit in, playing with people I look up to and hold to a high standard, and lack of control of everything.
Dave Johnson: It’s felt mild to intense depending on the night or show. It has manifested with some combination of general anxiety, decreased ability to listen, and physical, emotional, and mental tightness. I’ve felt stiff, tentative, emotionally dry, mentally stagnant with ideas, and slow or unresponsive in support of my fellow players.
Jason Walther: At first, on a scale of 1-10, a Spinal Tap 11. Waiting in the backroom to go on stage for my first showcase (a sketch class), I literally almost said “Sorry, can’t do this” and ran away.
Ceci De Robertis: It was terrible! [In my professional life,] one time I had a court date to appear a judge to ask for an extension of time. It was a slam dunk because I knew my opponent wanted it too. It would have taken less than 5 minutes. I was still afraid so I called in sick and had another lawyer cover. I wasn’t sick at all – I was terrified!
Lura Barber: Increased heartrate, mind racing, sweating. Usually in the 5-10 minutes leading up to a performance, when I’m waiting in the wings.
Dan Miller: When I first started taking classes, I would feel sick to my stomach for about week leading up until the showcase. It was never bad in class because I trusted my classmates, but the idea of performing and possibly being judged by strangers was terrifying. This has persisted throughout my performance career — from being on indie teams to Harold teams to an ensemble. In the hours leading to up to the performance my body responds to my nervousness almost before my consciousness.

Do any moments stand out as the peak of your stage fright?

Dave Johnson: One night I had zero warm-ups, I felt almost paralyzed with fright, and my fellow player (Topher Bellavia) made a huge, emotional, angry offer to start the scene. I managed to use my fear and his bold initiation to springboard into a super sensitive, emotional character. I think it was one of my best performances ever and I think it speaks to the truth and power of being where you are (emotionally, physically, etc.) and using that as the truth of the character. If it’s already there, you can just use it. Although it can work wonderfully (I’ve done it many times), I think it’d be problematic if every scene or character was starting from a place of fear.
Dan Miller: During my first run at FIST in 2011, my team made it unexpectedly far and my terror grew with every round. My competitive edge just made everything worse. It was round-the-clock heartburn.
Bri Lux: The first time it happened was my indie team’s first big show, and it was an out of town festival competition. I texted the team from the bathroom, letting them know I was throwing up, and this was about 5 minutes before we were supposed to go on stage. I came back into the theater right as they called us on stage, and I was basically a rag doll – my team took total care of me, directed me to what they wanted me to do, and I developed a character that said very little, but used a lot of facial expressions. We advanced to the next round of the competition, and it was one of the best shows we’ve ever done, still to this day.
Ceci De Robertis: The day of my first showcase I threw up and cried the whole way over to Source. For my first year of improv, I pretty much threw up before each show. Whenever I had a show I packed a toothbrush and toothpaste.

How have you managed it? Has it gotten better?

Dan Miller: It’s only in the past year or two that I’ve really cooled off. I still always get butterflies during warm-ups and in the shoot backstage, though. I think the secret is just reps, reps, reps—the more shows you do, the less a show is a “big deal” and instead it’s just 20 minutes of your life on stage. I think there’s a healthy amount of fear that you should feel on stage to keep you from becoming complacent.
Jason Walther: It has taken over seven years, but it’s almost a 180. For years, I gave myself assignments to confront fear both in practice and on stage. Like “I will start the first scene” or “I will make one strong choice and stick to it, no matter what”. That process more than anything is what has allowed me to slowly decondition the fear. It will never be at zero, but what’s different from when I started is that I now see the value in a little bit of nerves and don’t want it to be at zero.
Lura Barber: It goes away the more I perform. During October Issue, when I was also performing with Nox, I had almost no stage fright. I think it was because I wasn’t putting so much importance on any single show.
Darnell Eaton: Meditation and therapy works! Acting coaches! Allowing myself to make mistakes, putting myself purposely in uncomfortable situations, getting to know people, doing something childlike once a day, never quitting have all helped and still helps today!
Ceci De Robertis: My evolution came in several stages. It wasn’t all at once. There are a lot of milestones: 1) One day I realized that I didn’t pack a toothbrush or toothpaste. I realized I didn’t need it anymore. 2) I was in a show that was falling apart really fast. It was an awful, awful show. I looked at my scene partner and he winked at me. That’s when I realized that we were in it together! I decided to start focusing more on supporting my teammate and less on what the audience thought. It was a terrible show but less terrible. I have forgetting the audience and focusing on my partner ever since. 3) Reps. Millions and millions of reps. I got used to that feeling of vulnerability and that has made all the difference.
Pete Bergen: Taking acting classes. Working on breathing and remaining present. Playing with people I love.
Bri Lux: The good thing was that (after that first experience) as soon as I hit the stage, the sick feelings would go away as I just got sucked into the show. Also, just having more reps helped – as I performed more, the novelty of going on stage wore off, and the anxiety didn’t affect my stomach as much. But I also need to be careful about having too much coffee and timing when I eat before shows.
Dave Johnson: I’ve managed it by using many different kinds of warm-ups, both individual (breathing, vocal, whole body) and group-warm ups. Ideally, I should give myself about an hour: 30-40 minutes by myself and 20-30 minutes with a group, plus a few minutes just to stay loose and hang out right before going on. It’s gotten less intense overall (in college I had a hard time eating within a few hours before, which was really hard). And it’s gotten more manageable, mostly through the use of warm-ups.