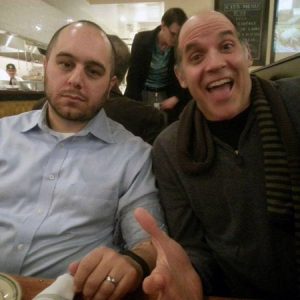 Q&A: Jive Turkey on how to make a great duo

Jive Turkey is one of DC’s longest running duos. Made up of Joe Randazzo and Chris Ulrich, the pair prove that in improv opposites often attract, and create great improv. In this interview, Randazzo and Ulrich discuss their origin, what makes a great duo, and why women keep leaving them.

Jive Turkey performs on Dec. 1 as a part of Seasonal Disorder.

OK, first things first. Why did you two start doing improv? (And why do you keep coming back for more?)

Joe: I started with a college short-form troupe, back during the Clinton administration. A friend told me I was funny and that I should try out for a troupe called Mission Improvable (you couldn’t swing an improv stick back then without hitting a team named that). I’ll admit—the first few rehearsals were rough. Not just because of the comedy, but also because I was young and full of self doubt. I almost quit, but my first performance changed all that. I went out and killed it. I haven’t stopped since.

The doubt lingered on, but that never really goes away, nor should it. It’s different than imposter syndrome, though. It’s more like a feeling of, “I could be better and do better.” There’s a great quote by art critic Robert Hughes that says “The greater the artist, the greater the doubt. Perfect confidence is granted to the less talented as a consolation prize.” I believe that. I don’t kick my own ass as much as I used to, and I’ve settled in my skin. Plus, my wife makes sure I’m still in check.

Chris: In some way or another, I’ve been doing it since I was a wee lad. Nothing’s ever made me happier than when I make someone laugh. Yet, I didn’t find classes or know improv existed until 2004. I saw a story in The Washington Post and called “Allyson Jaffe at the DC Improv” and took the plunge. The few years prior had been rough—when I walked into improv and laughed for the first time in ages, I knew I was home. It’s been one of the great gifts of my life. The chance to collaborate with others and work off their improvisational minds is a rush. I can’t get enough of it. It’s my sanctuary.

Can you tell us the story behind Jive Turkey?

Joe: So, Chris and I knew each other from a taping at the DC Improv’s Food Network show called Restaurant:Impossible, but we really started hanging out at Georgetown University when Murphy McHugh held rehearsal sessions. That’s where I met the original crew of Jive Turkey: Chris, Katie Klein, Stephanie Anderson, and myself. As the rehearsal group started winding down for the summer, the four of us kept it going. (Greer Smith was also supposed to be in the group, but she couldn’t find parking. Not a joke.)

Chris: Joe laid it out. Those early shows were awesome and we started our first set with the improv format “Back in Time.” It worked for our comedic energy at the time ,with each of us bringing a slightly different energy, and we meshed together really well . When were getting ready to do our first performance at DC Improv as the four of us, we needed a name. Nobody really had one—then, Katie Klein (who’s now kicking butt at Second City in Chicago) gave us the name Jive Turkey. And that was that.

After Katie left, Joe, Stephanie, and I made our debut at WIT’s Fighting Improv Smackdown Tournament. It was really fun. These days, it’s just Joe and me—Stephanie is also killing it in Chicago, though she’s coming back to DC in December to do her new two-person sketch called Girlish. [Ed note: GIRLish performs the weekend of Dec. 14-16—Thursday (improv set), Friday (sketch), and Saturday (sketch)]

What was it like to adjust from four people to two?

Joe: A duo was a whole new dynamic, but one that’s hugely rewarding. No more sitting on the sidelines, ever. The style has shifted dramatically, and what used to be a montage and series of quicker scenes has given way to longer monoscenes, multiple characters, and more character-based shows. I loved playing with Stephanie, Taylor, and Katie, but this to me is closer to “traditional theater” than anything I’ve done before.

What are the secrets to making an improv duo work so well?

Joe: Trust and enjoying each others company. If you can make each other laugh without wasting the audience’s time, they’ll go along for the ride 100%. Also, it doesn’t hurt if each of you aren’t the same personality or performer type. A yin-yang relationship is very helpful in providing story, conflict, and idea generation.

Chris: Also, what’s cool is when we’re in the same mental groove and contributing to the piece. Neither of us has a clue where it’s going. We’re figuring it out one line at a time. But that’s okay—that’s where the fun lives. And it seems redundant to say this, but listening is the key. During the successful shows, we were tuned in and listening for the first funny or interesting idea to explore and see where it goes. When we’re not in sync, it’s often due to a lack of listening or getting caught up in, “WhereAreWeGoingNextism.” Those shows are still valuable, though, because we can break it down a bit and our trust and collaboration allows us to build off of it in the future.

What (for each of you) is your favorite part about being in a duo?

Joe: Doing grounded scenes, doing real characters who have emotions and backstories, not having to bend to five to nine different styles in every show. In our duo, we get to decide on our style and do our own thing, together.

Chris: Everything Joe said, and I’d add creating interesting worlds. When the show is over, it’s great to go back and think about these people we created, whether they’re owners of a Sbarro’s franchise, occupy a CVS, relive Jurassic Park, or vacation in a Tuscan Village, you can’t help but offer a moment of gratitude to them. It’s incredibly fun to live in their skin for 25 minutes.

What specifically do you like about doing improv with each other? How do you think you complement each other?

Joe: Chris is my favorite person to work with. He’s goofy and physical, whereas I detest whimsy and moving my body. He’s also emotionally vulnerable, which has pushed me to go more in that direction, much to my benefit.

I don’t worry about Chris having a bad show—I know he’s going to go out there and do his best, which is more than enough to carry us. He doesn’t need me. (Except for that time he got a concussion right before we went on and I ended up recreating Jurassic Park for 25 minutes. Then he needed me. But only then.)

Chris: I love working with Joey Randazzo. He’s cerebral and smart as F@#k. And more physical than he lets on. Mix that with his evolution as a human being and life experiences, and you get a fantastic duo partner and friend. I know in every show, he’s going to bring everything he’s got and I trust that he has my back. Also, Craig Cackowski, an improv teacher in LA, talks about the fun in playing mildly annoyed. Nobody plays mildly annoyed better than Joe, and it’s hard for me not to break when he nails it.

Finally, we’re friends. That energy permeates the work as we play different characters or step into each other’s. It’s joyful and priceless. And, it’s a gift to create these worlds with Joe. The collaboration and appreciation we’ve for each other is the essence of Jive Turkey duo energy and why we still do it.