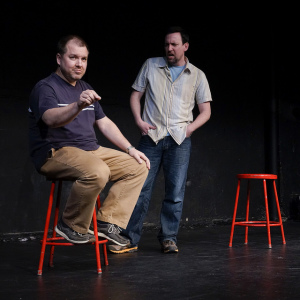 Jackie Improvises the End of the World

In Jackieland, WIT’s longest-running ensemble Jackie acclimates to a decimated, post-apocalyptic world (a la Zombieland). Made up of Ken Hays, Sean Murphy, Rich Nyman, Greg Tindale, and Joe Uchno, the group explore what wiped out earth’s population and how the survivors get by. The answers change every night and no performance is the same.

Joe Uchno and Greg Tindale of Jackie recently answered some questions about their contribution to BINGE, the confines of post-apocalyptic improv, and which celebrities they would spare from world’s end.

Interested in seeing Jackieland? Get tickets for BINGE HERE!

Tell us about your format! How did you concoct it?

JU: I enjoy a lot of post-apocalyptic media: The Walking Dead, 28 Days Later, Zombieland, etc. I’m very curious as to how society would function if most of the norms fell away as a result of nuclear disaster or zombie proliferation. So I wanted to explore those worlds in an improv show. The rest of Jackie was on board with that and as a group we figured out how to best present it.

Tell us about a fun scene in the show during rehearsal (or during one of your first performances)?

GT: In our show we imagine what life would be like if there was a catastrophic event that changed life as we know it. In one rehearsal we found that after the fall of the majority of humanity, bears had begun to evolve past humans. There were bear art galleries. Bears were fixing up classic cars. Bears were dating the remaining human women. Bears were the coolest and regular human men were second-rate.

What makes this show different from all your other shows?

JU: Everything, I guess. No improv shows are the same. This won’t make the published edition. But we start the show with a group scene at our camp at night and we actually turn the lights out in the theater and use flashlights, which I think is cool.

What are the some of the challenges that you face while tackling this format?

JU: Post-apocalyptic situations are typically sad and might not go over well with an audience looking for some laughs. So we make a point of showing how some of the last people on earth still manage to have fun. But it’s difficult to take the end of the world seriously while not getting morose. We also don’t want to live in the past so we try not to dwell on how the world ended to the extent that we may not mention it in the show, but it’s difficult to avoid.

What one item would each member in the group choose to have in a post-apocalyptic world?

GT: You would find me in a palm frond hut on a beach with a fishing pole. You don’t want anything too flashy because other survivors would want to steal it from you.

What three celebrities, living or dead, would you want on your side in a post-apocalyptic world?

JU: Robert Loggia, cause he’s a bad ass. Chris Farley, cause this question allows me to raise him from the dead and I’ll need a drinking buddy. Heather Graham, cause I have a verbal agreement that if anything ever happens between her and I, it’s cool.

GT: Steve Irwin/The Crocodile Hunter. He is great with animals and seems like a fun guy to be around. The Rock and Vin Diesel. These guys come as a pair. The friendship that they built during the Fast and Furious movies warmed my heart. Brian Voltaggio/celebrity chef. He would be munting all day (mushroom hunting), then prepare killer forest delicacies for our clan.

How would you spend your last day on Earth, knowing that it would end at midnight?

JU: With my wife, who makes every day fun.

GT: Cell phone off. Email off. Clothing off.