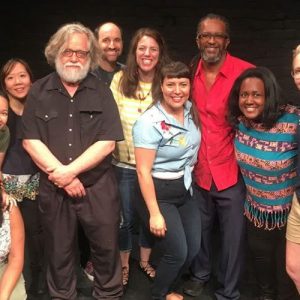 How did Poetic Resistance come into being?

The team was originally called Poetic License and was created by two former members, Stacy Hayashi, and Sabahat Chaudhary. In the summer of 2013, Stacy and Sabahat were talking about how much they admired Magnet Theater’s Kiss Punch Poem show (now retired). They decided to adapt that show and poetry as a theme format for the Improv Sandbox jam (also retired). After trying it at Improv Sandbox, and with Stacy’s permission, of course, Sabahat decided to do it as a format for Press Play (not retired). It continued on from there!

What happens during a Poetic Resistance Show?

Poetic Resistance works in three parts, which is a lot to put in one show!

First, we take the stage with two poets. One poet performs their pre-written poem about social justice, which the audience and the improvisers are both experiencing for the first time. The other poet sits in the audience with a notebook.

Second, the improvisers create scenes based on the themes, details, and messages in the first poet’s poem. The audience gets really engaged because they see us exploring and interpreting those poetic concepts in real time. We create a direct connection between the poem’s art as inspiration and the improv as a new form of art.

During the improv scenes, the poet in the audience has been taking notes and live-writing a poem inspired by both the first poem and our performance. To close the show, the poet performs this poem. This is really where the show comes together: the second poem is a heightening of everything the audience has experienced before. Sometimes you can feel the chills running up and down everyone’s spine.

So, essentially, in the duration of our show, we have poetry into improv, and improv into poetry.

Is this a show for improv fans, comedy fans, or both?

Improv fans, comedy fans, poetry fans – we will take all the fans! The format itself is very unique. Improv fans will really see the magic in collaborating with the poets and vice versa. Comedy fans will find humor in our takes on and interpretations of the poem. Poetry fans will delight in seeing imagery and metaphors brought to life.

It’s also a show for people who want to see art that makes them think and feel. Our show explicitly draws on social justice ideas and themes, so we tend to have scenes that get at topics that are pertinent in our culture and society.

To you, what is one of the most memorable moments in the show’s history?

We had a show the weekend of the Women’s March in 2017. Everybody’s emotions were raw, including the poets, the crowd, and the improvisors. The whole show felt like a group hug and a form of group catharsis. This was right after the 2016 election, and we had just changed our name from Poetic Justice to Poetic Resistance. The second poem is always a delight. We know the show is good when J.J. gasps on the backline 🙂

Where do you find poets to collaborate with?

Throughout the existence of this team, we have been cultivating a relationship with the local poet community. We have formerly featured poets make introductions, get referrals from friends, and the group grows by word of mouth among poets. WE ARE ALWAYS LOOKING FOR NEW POETS! If you’d like to be either the opening poet (who recites/reads a poem about some kind of social justice issue) or the closing poet (who writes a poem on the spot throughout the show, then reads it at the end), please contact J.J. Jackson: jenniferjackson33@gmail.com.

How would you describe your dynamic as a team? Are any of the team members poets themselves?

The team roster has shifted over the years but members have always been committed to bringing social justice issues to the forefront, promoting intersectional experiences, and using comedy to “punch up” (not making the joke about a person’s situation with less power and privilege). This type of comedy takes a lot of trust, honesty, and vulnerability.