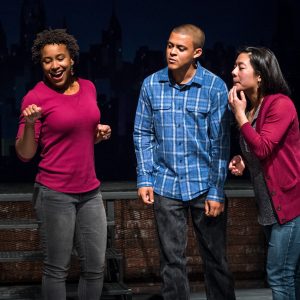 FAQ about Harold teams and the audition process

So you’ve completed the WIT curriculum and now you’re gunning to be on a Harold team.  Awesome!  The Harold team program has served as a training ground for hundreds of improvisers.

The first thing you’ll want to do before you audition is check out the Harold Team Mission and Expectations document, which outlines the purpose of the program and what’s expected of players.  Below, we’ve outlined some frequently asked questions about the audition process to help prepare you.

How often does WIT hold Harold auditions? When are the next round of auditions?

Now that we are back in the groove of Harold Night after the COVID hiatus, Harold auditions will typically take place toward the end of each “cycle” (i.e. every 6 months). The upcoming cycle ends in June 2023.

Are auditions only to create new teams or to replace members of existing teams?

It depends on a multitude of variables (the number of teams in rotation, vacancies on existing teams, etc.), but Harold auditions can serve as an opportunity to create new teams or place new members on existing teams. This varies cycle to cycle depending on the circumstances.

Do a lot of people drop off teams between seasons? Or do all current members have to re-audition?

The number of players that drop off of teams between cycles varies. Sometimes a few people drop off (leaving the program, moving to a company ensemble) and new members will be added. Sometimes existing teams lose members and the teams are reorganized into new teams. Sometimes a team is cycled out of the program. The end goal is to create teams doing great work, and to help players further develop their craft.

Harold players or teams can be taken out of rotation after the careful consideration of Harold team coaches and the artistic director. Team compositions or reorganizations are usually determined in a way that’s informed by the audition process.

Players whose development appears to be plateauing or regressing may be asked by the Harold coaches group to re-audition, regardless of how many cycles they have been in the program. Re-auditioning can show the coaches that players are committed to the program, and provides a chance for players to display their skills. Performers who need to re-audition will be notified in advance.

Harold teams are cast, coached, and managed entirely by WIT artistic leadership and are focused on player  development. That is, helping individual players develop their skills. Sometimes a by-product of this is a Harold team that’s strong enough to evolve into a company ensemble. This is the exception, not the rule. Current company ensemble Madeline originated as a Harold team.

What do the auditions look like? (Eg. Scenework with a small group on stage, a large jam, a Harold?)

It’s pretty straightforward.  Auditions begin with a warm-up, just like class. Your group size may vary but will typically be around 8-10 players. You’ll warm up together with the audition leader acting as the teacher/coach. You’ll usually perform a Harold together and there may be some other directed scenework.

How do dues work?

Dues are $45, paid monthly through PayPal. You can set up a recurring charge so you will be automatically charged. When you are placed on a Harold Team, you will receive more direction on how to pay your dues. These monies help offset coaching, space rental, and other costs.

Typically the artistic director and multiple Harold team coaches past, present, and future attend auditions. Occasionally other experienced players, coaches, and/or directors help in the process.

What are they looking for in the audition?

In the auditions, we’re looking for players to demonstrate these skills:

How are casting decisions made?

It’s a little different every time, as multiple factors play into these decisions. Main factors we consider:

What if someone is currently enrolled in a class when they are cast on a team?

If a player is cast, and they want to withdraw from a class, they will get a partial or full refund, depending on the situation. Some players opt to stay in class even after joining a team. However, the decision needs to be made soon after the time of casting.